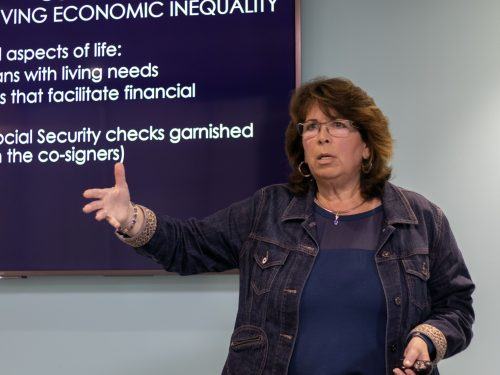 Deborah Olson, professor of management and leadership, considers “Culture and Leadership: The Case of Puerto Rico.” Her talk exploresd the effectivenss of leaders and cultural differences in leadership styles, Tuesday in the Executive Dining Room. / photo by Danielle De Luna

Leadership may take the form of many shapes and sizes, however, Deborah Olson, professor of management and leadership, believes that regardless of position, title or background, an effective leader is one who takes action to initiate change.

Olson presented a lecture titled, “Culture and Leadership: The Case of Puerto Rico” at noon Tuesday in the Executive Dining Room. She spoke on the various elements of a leader, while providing examples of individuals from Puerto Rico who fit those elements.

Focusing on three key factors, Olson defines a leader as someone with skills in interpersonal versatility, knowledge or insight, and adaptability.

Through her research, it has been found that interpersonal versatility is essential in regards to building relationships so as to provide guidance as new problems emerge, she said.

“The second element is about learning and insight, to be able to take knowledge and translate it into creating change,” Olson said.

“We need to have the relationships among people in order to ensure that the information and knowledge is deployed through the network.”

The last element she defined was that of adaptability, something she said Puerto Rico has had to respond to at an exceptional rate to deal with opportunities or issues that may arise, such as Hurricane Maria.

With these three elements in place, Olson explained that although education is ingrained in all of us, there will always be a “right answer.” The truth of the matter is that approaches and perspectives will always differ. Through this, Olson stated that in searching for the “right answer,” leaders will never stop learning.

“There is no right answer,” Olson said. “When leaders are learning about themselves and each other they’re identifying what helped create success, and ‘what do I need to adjust given the challenges today.’”

Throughout the lecture, Olson gave examples of several leaders who took the initiative to help those suffering in Puerto Rico after Hurricane Maria. Jose Andres, pioneer of Spanish tapas in the United States, fed over two million displaced individuals within the first 30 days after Maria hit, while FEMA was still busy studying and planning out their response, Olsen said.

Natalia Quiles Deya, a former full-time lawyer turned activist attempting to regrow the island in a way so as to allow Puerto Ricans the opportunity to depend on their own local production rather than the United States.

“I know Puerto Rico is in a very delicate state right now where, even after 18 months of Hurricane Maria, it’s still struggling to find some stability in bringing hope to its own people,” Tania A. Ruedas Ortiz, junior political science and speech communications major, said. “If California were in the state Puerto Rico is in, you know we’d get all of this help, so why aren’t they getting the help if we fought so hard for them to be part of the U.S.?”

The largest cultural differences between the United States and the Caribbean islands, such as Cuba and Puerto Rico, reside in power distances, indulgence and collectivism.

While the United States focuses on an individualistic approach, the Caribbean Islands focus on a more collective approach that allows individuals to look instead at what the whole may need, and how to obtain those needs together.

Olson provided six dimensions of cultural values that societies can be analyzed upon through the use of the Hofstede Cultural Dimensions as follows: power distance, masculinity versus femininity, low versus high uncertainty avoidance, short versus long term orientation, restraint versus indulgence, and collectivism versus individualism.

Puerto Rico has a higher power distance in relation to the U.S., meaning that the people tend to not offer their opinions or suggestions to a leader unless explicitly asked for and given permission to do so, Olsen said.

Populations within Puerto Rico also tend to indulge more than they restrain due to the fact that they live in the eye of the storm, in many cases resulting in the idea that they may not have tomorrow so they should live for today, Olson said.

Collectively, people have the opportunity to turn to their network in the case of a rising issue or challenge, allowing for a different perspective to ensure effective results, she explained.

“Overtime as challenges evolve and problems become more complex, we need to look at evolving our approach as a result,” Olson said. “What we have is not our position, but the credibility that we nurture through our actions and our interactions with others.”

“The institutional, organizational leadership is not the one that actually is the leadership that brings change and so forth in many cases,” Al Clark, professor of humanities, said.

“It seems to me that in some ways the structures that we have in western cultures for the choosing of leadership and so forth is broken down because it amounts to people fighting for political advantage rather than trying to develop emerging leaders.”

Charles Doskow, professor of law, brought up Ricardo Rossello, the Puerto Rican president who resigned in July, to Olson after the lecture.

“Some months ago, the president of Puerto Rico was forced from office, basically for these tapes that demonstrate the contempt in which he held in office. That’s a commentary on something, I guess, on what kind of leadership has that view on the people their supposed to be serving.”