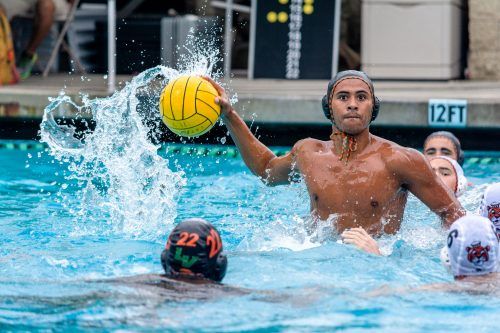 The men’s water polo team took a huge win over Occidental, 18-10, in its conference home opener on Saturday morning at the La Verne Aquatics Center.

The Leopards jumped out to the early lead thanks to a pair of goals from junior attacker Guillermo Ocasio.

The Leopard defense stood tough, allowing only one goal in the first period and got La Verne out to an early 4-1 lead entering the second period.

Both offenses would turn it up in the second as La Verne and Occidental would trade goals for the entire period.

The Tigers opened the scoring in the second period cutting the Leopards’ lead to just two after a goal from freshman attacker Kellen Radtkey that snuck past junior goalkeeper Brian Wilder’s outstretched arm.

Both teams would then go back and forth in the action packed second period matching each other goal for goal.

The Leopards had a three-goal lead late in the second quarter but right before the half exclusions on both teams lead to a 5-on-5 opportunity that tipped in the favor of the Tigers.

Tiger sophomore mid, Cian Concannon would score the goal thanks to a pocket pass from freshman attacker Shea Grosz who passed it perfectly from the outside which allowed Concannon to easily tap it in the for goal, cutting the Leopard lead to two heading into half.

Head coach Pat Beemer knew some adjustments needed to be made if the Leopards were to stay on top.

“We love the home run ball, but I told our guys to slow it down” Beemer said.

The Leopards came out of the half strong and the defensive adjustments were evident as La Verne would hold Occidental to just one goal in the third quarter.

The Leopards responded with a great effort on both sides of the ball. Senior utility Charles Ortega made the Tiger defense feel his presence as he scored three of the four Leopard goals in the third to put La Verne up big 12-7 at the end of the third.

The Leopards ran away with the game in the final period with more lethal offensive possessions.

A leap of Leopards would score a total of 6 goals to put away Occidental for good; including a pair of goals from senior defender, Rex Sample.

Wilder shut the door on the Tigers only allowing three goals in the final frame, including two back-to-back saves with two minutes remaining, ultimately sealing the win.

The Leopards would win the match 18-10 improving to 4-6 overall and 1-1 in conference play.

Ortega led all players with five goals on the day and Wilder got the win with 12 saves and two steals.

After struggling in the first half defensively, Wilder knew the Leopards were going to make the adjustments they needed.

“After playing two quarters we got a feel for the game and after talking it over we made the adjustments we had to and it helped us win today,” Wilder said.

The Leopards executed their game plan against the Tiger defense. Ortega and the Leopards were confident throughout the game.

“We worked on our counter-attacks and tried to get the ball in the middle. We established position in the middle and it opened up the perimeter guys for outside shots” Ortega said.

“We are learning to play with each other more as the season goes on, it’s giving us a mold to be successful down the road,” Halchev said.

Coach Beemer knows there is still work to be done with a match versus Chapman on Friday.

“This win is good for building confidence but we have a lot to work on and the focus is now on Chapman,” Beemer said.

The Leopards will host the annual Gary Troyer Tournament this weekend. They open the tournament with a conference game against Chapman at 11 a.m. Friday.