By Danielle De Luna, Priscilla Applebee on October 4, 2019 in News 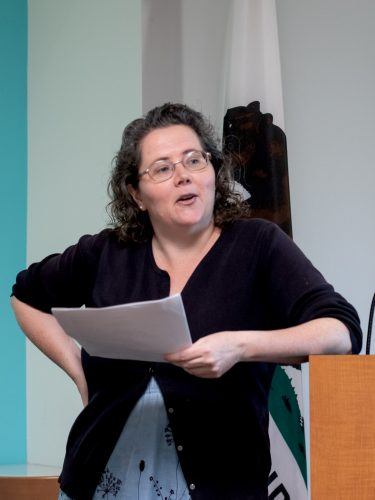 Associate Professor of English Jane Beal’s Lecture Tuesday, “All Creatures Great and Small,” was named and themed in honor of World Animal Day, which is Friday. / photo by Danielle De Luna

“All Creatures Great and Small: A Poetry Reading,” was the title and theme of the presentation.

“A lot of people when they do poetry reading, read straight and that can be very effective,” Beal said. “But I like to mix it up, so that people can be entertained.”

The phrase “all creatures great and small” originated in an Anglican hymn printed in 1848 by Cecil Frances Alexander.

She chose the theme to correspond with World Animal Day, which was this week.

She began the presentation talking about her time in Uganda as a midwife – and how she was able to see animals all around her. This inspired a poem, “Now I see a yellow billed stork” which she wrote in the style of psalm.

The poem describes the animals she saw in Uganda without having to pay or see them caged.

Beal collaborated with her brother, Andrew Beal, to turn some of her poems in her collection into music.

Their album, “The Jazz Bird” is on Soundcloud. Beal had then made the transition in her writing from large animals to small ones.

On Tuesday, she talked about her time seeing a brewer’s black bird and having the opportunity to hear it as her morning alarm. Again inspired, she wrote ea sonnet and a song.

Beal played four songs during the presentation Tuesday, including Brewer’s Blackbird, inspired by her writing to bringing a new life to her work.

Beal also has written haiku’s, including one about her time bird watching at Bolsa Chica state beach in California.

Each of the poems she shared Tuesday has a relationship to her life’s adventures, and all were tied to the theme of “All Creatures Great and Small.”

“She has such a wonderful body of poetry,” said Al Clark, professor of humanities. “I hope this encourages students .. to poetry.”

Priscilla Applebee can reached at priscilla.applebee@laverne.edu.