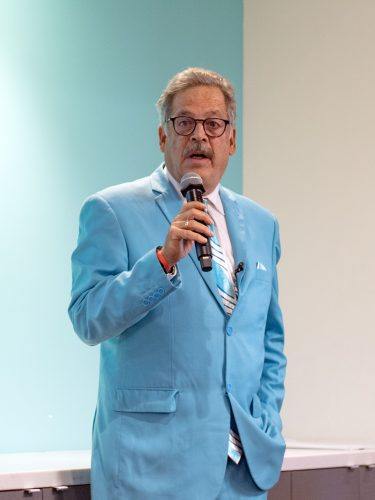 Donald Pollock, professor of communications emeritus, gave his last lecture, “Everything I’ve Ever Done Has Made Me Who I Am,” Tuesday in the Executive Dining Room. / photo by Danielle De Luna

Donald Pollock, professor of communications emeritus, told the stories of significant life events that led him to his position at the University of La Verne in 1991, where he would spend the next 28 years of his life, and shared the lessons he learned along the way at his final lecture, “Everything I’ve Ever Done Has Made Me Who I Am,” Tuesday in the Executive Dining Room.

Religion has played a large part in Pollock’s life. He said he believes in the Jewish concept of “tikkun olam,” meaning “world repair” and is the philosophy of bringing change to the world, he told more than 50 people in attendance.

Pollock had volunteered throughout his life, which made him realize what he wanted to do with his life, so he began his career as a social worker.

“This is what I wanted to do, I wanted to be involved in a life of service,” Pollock said.

While working in a hospital with people with schizophrenia, he realized that talk therapy would not work so he developed what he called “psycho cinema” and realized the power that photography and film holds.

“It was amazing to me that this idea of photography was such a part of our culture, that no matter how crazy somebody was even if they were in the midst of a psychotic break, they could stop long enough to pose for a picture,” Pollock said.

This idea of psycho cinema became Pollock’s first professional academic paper. Developing psycho cinema made him realize that he would rather be a filmmaker than a social worker.

Pollock came to the University of La Verne with a vision for the communications department.

“How do we get better gear? How do we build a ULV mafia, where students graduate and they hire other La Verne students and hire other students for internships?” Pollock said.

Pollock said he wanted to have a broad-based program that teaches students a wide range of skills.

Pollock said that while the communications department has grown tremendously, it has not grown as much as he would have liked.

“The whole thing about having more producers, directors and writers, I would have liked to see it happen,” Pollock said. “But with Morgan Sandler as the new head of the broadcast program things are in good hands.”

Pollock said a lesson he learned in his childhood was that the life of crime was not for him.

It was only after someone was caught and arrested that he began to question what he was doing, Pollock said.

Pollock also told the story of pot deals gone bad. He said that one day he was on a roof buying pot from a stranger who was scamming them.

“One of his selling points he said to me was ‘Take off your coat motherf******. One of us is going off the roof.’ So he got all our money and we got nothing,” Pollock said. “So another important life lesson – don’t buy drugs off the street.”

“We’re a little department and as Don said, we became very big in the eyes of academia and made a reputation for us because of his leadership,” Keeler said.

While Pollock said his vision for the communications department was not met to the extent he had hoped, Keeler said that Pollock’s vision is becoming a reality because of Pollock’s leadership.

“I watched us grow from those two cameras to a multifaceted broadcast department that has turned out alumni of distinction,” Keeler said.

Alexander Clague, alumnus who graduated in 2015 and attended Pollock’s last lecture, said Pollock was a quirky teacher and mentor.

Clague recalled a moment when his professor said that Pollock cried while viewing his senior project.

“It was just nice that I could get a cathartic response from someone that I thought highly of,” Clague said.

Ned Teitelbaum, who went to film school with Pollock, said that he is a good friend who does not sweat the small stuff.

“He always said, ‘Don’t sweat the final cut, just be relaxed,’” Teitelbaum said. “Even though he’s from Long Island, he always had this relaxed attitude.”