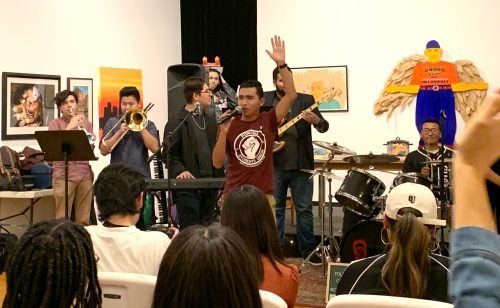 Romualdo Sanchez has been a member of the Pomona Student Union youth group for three years. The group helps to raise awareness about different cultures within the city. The student union used art, music and performance to celebrate the Indigenous community while raising awareness for Indigenous Peoples’ Day. / photo by Eric Rangel

This event helped mark the third annual Unity Fest held by the Pomona Students Union in early October at the dA Center for the Arts in downtown Pomona.

“What is so apparent is that the young people have a tremendous positive energy. You can feel it through the music, the dancing, the food, and through the artwork,” Pomona mayor Tim Sandoval said. “As we look and think about where we are at in this country, where there is so much to vision, it’s great to see the youngest members of our community coming together uniting and representing something very powerful… rather than working against each other, we are actually working together,” he said.

The student group has created an opportunity for guests and participants to speak their minds, as well as a place that empowers individuals to stand up for what they believe in. The student union also meet with the city council and advocates for youth commission.

“Pomona students are offered the opportunity to say what we want and express and advocate for things that are actually meaningful. We are able to say things and our voices are being heard and we are making a positive change for the community,” said Emely Andreo, a senior at Garey High School.

Unity Fest merged art, music, dance and food to showcase the struggles of the Indigenous people.

The Student Union did so by exposing the community to something typically unfamiliar, such as highly choreographed traditional Folklórico dancing.

Xanath Dance Company, based in Rancho Cucamonga, put on the Folklórico dancing to help immerse the guests into the festivities of the night.

Some of the art displayed portrayed the performers as they put on a traditional Concheros dance, something Unity Fest used to further showcase their elaborate and extravagant dance routines.

“We really wanted to see different diversities of people coming in, those who know our community and those who aren’t aware to learn about it,” Destiny Rivera, senior at Fremont Academy, said.

There were roughly forty people attending the event participating in a night of awareness, learning and artistic exploration.

Unity Fest tackled the topic of culture and what it means to various individuals through art and conversation.

Some of the art showcased at the event was from Pomona’s Classic Car Show. The art highlighted the iconic, vintage cars typically on display in early October at the Fairplex.

Creating a chance for students to step up in their community and interact with their local government offers these students various opportunities which are severely lacking in other districts.

“I think, with the Pomona Student Union, it gives them an opportunity to learn more about their community, to learn about leadership, but I think the most important thing they learn is that it’s about service to others and I think that’s really what is reflected in their work,” Sandoval said.