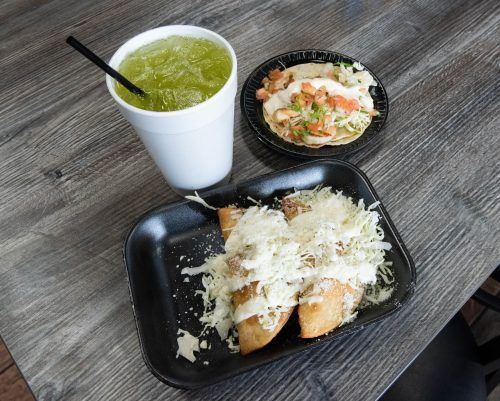 Don Baja Grill serves a selection of seasoned Mexican food, ranging from potato tacos, shrimp tacos and carne asada tacos, and drinks like horchata and a spinach-pineapple. Don Baja Grill is located at 1524 Foothill Blvd. and is open every day from 10 a.m. to 9 p.m. / photo by Katelyn Keeling

The restaurant had a simple look with half wood walls and half painted gray to match the sea and ship decor.

The walls featured various pirate and sea themes with anchors and ship wheels hung up.

By the grill, a small bookshelf had white ceramic sea shells and animals, along with ship diagrams.

The sea themes did not just end with the decor, but also translated into one of their most popular dishes.

The shrimp tacos, potato tacos and carne asada tacos are three of the most popular menu items, so I ordered one of each.

The shrimp taco comes either fried, or grilled for an additional 50 cents.

I ordered mine grilled, but was skeptical of it at first.

Shrimp is an easy meat to overcook or undercook, but after I had my first bite I was convinced.

This was one of the best shrimp tacos I have ever had. The shrimp was perfectly cooked and seasoned. It was like heaven in my mouth.

The potato taco was fried to crispy perfection and was full of potato flavor.

The taco was topped with cotija cheese and a homemade cream sauce.

And finally, the carne asada taco.

Being Mexican-American, I have had my fair share of carne asada tacos in my life. Some are horrible, while others are delicious.

Don Baja Grill’s carne asada taco, however, is hands down one of the best I have ever had.

The taco came topped with cilantro and onion and did not skimp out on the meat.

Before I took a bite of the masterpiece before me, I was prepared with green salsa and lemons to drown the taco in, just in case it wasn’t good.

As I took my first bite, the contents spilled overboard – a sign of a good taco. The meat was perfectly seasoned with a hint of citrus, and the cilantro and onions were fresh.

Surprisingly, the taco did not need anything added to it, but I added some green salsa for experimentation. The spicy sauce only added more layers to the flavor.

Don Baja Grill also serves homemade horchata, spinach-pineapple and watermelon aguas frescas that are sure to awaken your test buds.

But the star of the show was the spinach-pineapple drink. I was apprehensive at first, but the cashier insisted I try it and so I did.

Had I not known the drink was made with spinach, I would have never guessed. The drink was bright green, full of fresh pineapple flavor, and so good that I ordered another on my way out.

With price ranges from $1.59 to $11, the food is delicious and worth every penny spent.