By Christopher Livingston, Eric Rangel on October 18, 2019 in Football, Sports 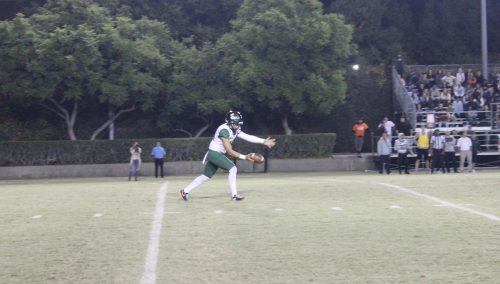 Sophomore punter Arturo Herrera-Caballero punts the ball against Pomona-Pitzer. Herrera-Caballero’s punts have put him in the top 25 punters nationwide in Division III. / photo by Eric Rangel

The Leopards fell to the Pomona-Pitzer Sagehens, 49-14, in a Southern California Intercollegiate Athletic Conference football matchup Saturday at Merrits Field in Claremont.

The loss gives the Leopards a 2-3 overall record and a 1-1 record in SCIAC. The Leopards currently sit in fourth place in the conference standings, behind Redlands, Cal Lutheran and Chapman.

The defeat comes one week after the Leopards stunned Claremont-Mudd-Scripps, the reigning SCIAC champions, in a 20-17 overtime victory.

Needless to say, none of that magic appeared at Merrits Field on Saturday.

“The hardest thing for us right now is, we have a hard time you know, how do we handle when we win,” said head football coach Chris Krich. “We’re good coming back from a fight, but if we lost it, we handle it pretty well. We have to respond better after a win too.”

The game got out of hand early and was virtually over after the first quarter, as the Leopards found themselves down 28-0 by halftime.

The Leopards struggled to find an answer to stop Pomona-Pitzer senior quarterback Karter Odermann, who threw for 190 yards and two touchdowns, but also rushed for 115 yards and four touchdowns on the evening.

Odermann ran a lot of run-pass option plays against the Leopards defense. Whenever the Leopards felt they had Odermann contained, he would find an opening in the coverage to take advantage of.

“We have to have a short memory. Not every game is going to be like that,” said senior linebacker Preston Carr, who led the defense with 13 tackles. “Odermann is a good quarterback. He takes what he can get and he makes the most out of everything he gets.”

Offensively, the Leopards also found it difficult to create anything positive. They found themselves deep in their own territory at the start of every drive, and could not string together enough positive plays to get them within scoring range.

Senior quarterback Matthew Albright started the game, but was only able to contribute 10 passing yards and one interception.

Senior running back Martaveous Holliday was a big offensive contributor during the first three quarters, rushing for 76 yards on 20 carries.

As the fourth quarter began with the Leopards down 49-0, Krich brought in senior quarterback Sam Taylor to take over the offense. Taylor was able to create a couple of good drives for the offense, scoring both touchdowns on running plays.

“We were just taking what the defense was giving us,” said Taylor. “We were throwing some screens here and there, able to hit some deep balls, get the running game going. We were hitting on all phases towards the end of the game.”

Despite the two scores, there was not much the Leopards could do at this point from such a large deficit.

The Sagehens took the game, 49-14, in Pomona-Pitzer’s fourth consecutive win over the La Verne Leopards.

Despite the outcome, one of the positives that appeared throughout the game, was the resiliency and “don’t quit” attitude of the Leopards. They fought hard on every drive and refused to give up.

“I felt our kids played hard,” said Krich. “How we build from this is learn from what not to do off of this. It’s a learning opportunity, we’ll fight adversity.”

The Leopards will return home to take on the Whittier Poets at 5 p.m. on Saturday in the Leopards’ Homecoming game at Ortmayer Stadium.