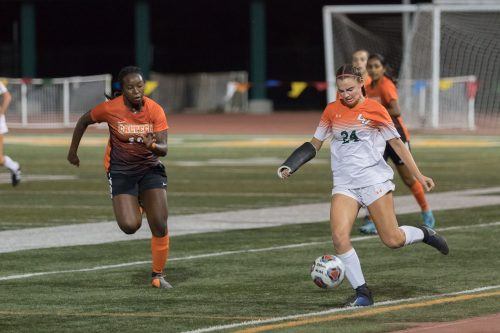 Leopard freshman defender Danielle Bennett looks to pass the ball up-field past Beaver junior defender Nayla Abney in La Verne’s game against Caltech Wednesday night. La Verne won the game 3-0 in dominating fashion, their second win of the season. With the win, the Leopards improve to 2-6-1 overall and break a four-game loss streak. The Leopards look to take on Cal Lutheran at 7 p.m. Sunday. / photo by Ariel Torres

The women’s soccer team ran away with an impressive 3-0 victory over the Caltech Beavers in a Southern California Intercollegiate Athletic Conference match at Ortmayer Stadium on Wednesday night.

The victory gives the Leopards a 2-6-1 overall record, with a 1-3-1 record in SCIAC competition. It was also the first win since beating St. Katherine 3-2 in overtime, back in early September.

The Leopards began the game as the aggressor, pressing high up the pitch and overwhelming the Beavers early in the match. The defensive approach was something that head coach Lauryn Pehanich has been working on with her team for the past few weeks.

“A couple of games ago we didn’t do what we should have been doing defensively,” Pehanich said. “We kind of made a few rules and guidelines on the defensive side of it, especially on the home field.”

The defensive approach paid off as Caltech was rarely able to create any sort of attack against the smothering Leopard’s defense.

Offensively, the Leopards maintained the same style of aggression. Several shots were attempted, though none of them would lead to a goal. Many, if not all, of these early shots came from outside of the box and flying either wide of the goal or above.

The first goal of the game finally came in the 32nd minute, in favor of the Leopards.

Junior defender Katherine Obregon connected on a blast from over 50 yards to give the Leopards a 1-0 lead. The goal, originally intended to be just a free kick, was scored as Caltech’s freshman goalkeeper Valerie Hetherington misjudged where the ball would land, the ball bounced over her head and rolled harmlessly into the back of the net. A major miscue for Caltech.

“That was supposed to be for Alina (Cobian),” Obregon said about the goal. “The wind got it I think, and it just took a weird bounce and went over the goalkeeper’s head.”

The Leopards continued to pressure and disrupt every attack that the Beavers attempted, consistently winning the ball in the midfield and setting up counterattacks.

The Leopards scored their second goal of the match with just seconds left before halftime. Junior defender Vivian Ramirez connected on a fantastic strike from the far sideline and was able to find the back left corner of the net. What was really impressive about the goal, was the incredibly difficult angle and distance that she shot the ball from.

“It was my first goal straight on the field, I was really excited, had some nerves but kept myself pretty cool,” Ramirez said. “I just thought ‘Okay I’m just going to take it, I’m going to kill it downline and see what happens’ and it went in.”

The second half of the match provided much of the same tactics as the first half. The Leopards continued to dominate in all facets of the game.

The third and final goal of the match was scored by sophomore defender Gizzel Sulca on a beautifully orchestrated assist from Katherine Obregon.

Obregon kicked the ball from deep, similar to her free kick goal from earlier. Sulca timed her run perfectly as she was able to beat Hetherington to the ball and place it into the back of the net.

“One of my teammates was sending it in for a cross, I was timing it and I just went in. It was basically just me and the goalkeeper and I just kicked it right in.” Sulca said.

Caltech was unable to muster any sort of offense as they were only able to get one shot off all game.

The Leopards would win in dominating fashion and maintain a clean sheet throughout the match.

The Leopard’s next matchup will be at SCIAC rival Cal Lutheran, where they will take on the Regals at 7 p.m. Saturday.