By Ariel Torres, Jacquelyn Giambalvo on October 25, 2019 in News 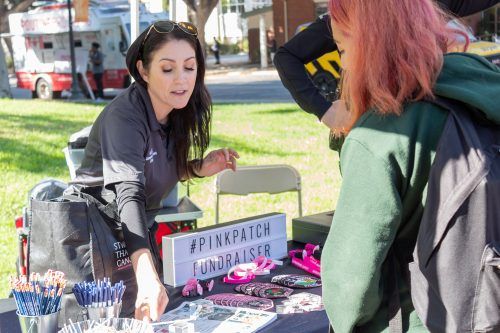 The Great California ShakeOut last Thursday allowed millions of people to practice how to “Drop, Cover, and Hold On,” in case of an emergency earthquake.

Th event at Sneaky Park was followed by a safety fair that provided the basic protocol procedures and education in case of emergencies. There were raffles, information on what to do during a natural disaster and demonstrations on how to put out a fire.

This year marks the 12th ShakeOut teaching people how to be prepared and survive big earthquakes.

There were 10 booths from different organizations including the La Verne Police Department and La Verne Fire Department that provided information about emergency preparation.

“I don’t really know what to do during an earthquake. If an earthquake happened, I would not be prepared,” said Shawn Carr, student worker for admissions.

“I have only felt one earthquake and it was a 4.0 but I would not know what to do if a bigger one happened,” Carr said.

The University’s app called LiveSafe features voiceless alert systems, anonymous options and the ability to request an escort or alert your friends of your location and route when walking around campus. The app has multiple features like the University map and report tips.

“My favorite thing about this app is you are able to report suspicious activity and send us a message, you can even take a picture or record it,” said Laura Avalos, University Safety Operations.