By Maydeen Merino, Veronyca Norcia on October 18, 2019 in LV Life 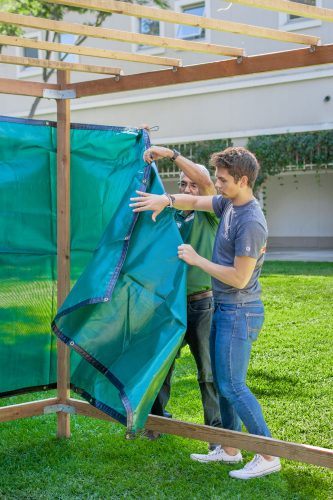 Daniel Loera, director of the office of multicultural services, and Ryan Konrad, freshman political science major, help build the Sukkah in honor of Sukkot on Oct. 11 in Sneaky Park. / photo by Veronyca Norcia

The Hillel club sponsored a Sukkot event in Sneaky Park from Oct. 11 to Oct. 14.

“Sukkot it’s celebrated globally by most, if not all, Jewish people, and it is the celebration of the time when the Jews had to leave Egypt from slavery and wander the desert for 40 years,” president of the Hillel club, Nicole Temple, said.

There was no shelter in the desert so Jews had to build temporary shelters they would put up and take down while traveling, called a Sukkah.

The week long celebration reminds the Jewish people of a time when they did not have a home of their own.

The event consisted of the building, decorating and blessing of the Sukkah, followed by a dinner in the Sukkah.

The Sukkah is blessed at the beginning of the celebration.

“We have a special staff that is made out of four different species that are native to Israel that represent the different aspects of the human body,” Temple said. “There is the Myrtle branch, whose leaves look like kind of the shape of an eye, the willow leaves which thin shape represents our lips, the palm fronds when picked at a certain time represents the human spine and the etrog that represents the heart.”

These items are then put together, and shaken three times in every direction with a special prayer to bless the Sukkah.

“I was really interested to coming over here to college and this is our third time coming to this event,” Claremont High School senior Joaquim Gratz de Lang said.

The Gratz de Lang family enjoys staying involved in the Jewish festivities provided by the University.

“Most of the Jewish festivals happens with the full moon because it’s an ancient tradition and they had to have light,” Reed Gratz said.

The Sukkah was built in Sneaky Park with wooden frames and a green tarp.

“If you look at Israel, in the buildings all the balconies have little hooks to build the structure,” Udit Gratz de Lang said. “When you build one at home you would use palm branches, ropes and pillows.”

The Hillel club wants to bring the community together by hosting these events.

“Of course, naturally any and all events run by Hillel here on campus are welcomed to all Jews and non-Jews,” Temple said. “This is all about building community and encouraging diversity.”