By Campus Times Editorial Board, Danielle De Luna on October 4, 2019 in Editorials, Opinions 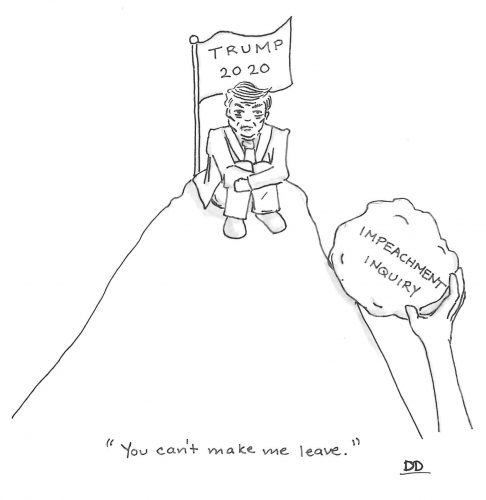 President Donald Trump’s behavior, lying shamelessly, threatening national security brazenly, and disregarding the Constitution and the structure of our government, while he destroys the environment for his own personal gain, may finally be catching up with him.

Last week, House of Representatives Speaker Nancy Pelosi announced a formal impeachment inquiry against President Trump, accusing him of betraying his oath of office and the nation’s security by pressuring Ukraine’s president, Volodymyr Zelensky, to investigate former vice president and leading candidate for the 2020 Democratic presidential nomination, Joseph Biden and his son.

Trump also suggested that China should investigate the Bidens on Thursday.

A one-day NPR/PBS NewsHour/Marist poll conducted last Wednesday found that nearly half of Americans approve of the House formally starting an impeachment inquiry into Trump.

An unidentified CIA officer, posing as the whistleblower, might be the leading cause of exposing President Donald Trump’s dangerous and unethical behavior to interfere in the 2020 election, a mere reflection of what happened in 2016 with the Mueller Report.

The accusations left Trump to do only what he knows best: rage on Twitter and deflect the issue at hand to everyone but himself.

“The Fake News Media wants to stay as far away as possible from the Ukraine and China deals made by the Bidens. A Corrupt Media is so bad for our Country! In actuality, the Media may be even more Corrupt than the Bidens, which is hard to do!” Trump said via Twitter on Monday.

Along with, “#FakeWhistleBlower,” and “The Greatest Witch Hunt in the history of our Country.”

Although, this will probably not result in an impeachment, it will provide the world another opportunity to see President Trump’s character and give people one more reason not to vote for him in the 2020 election.

If this impeachment inquiry accomplishes anything, it will at least continue to expose the unfit and dangerous threat President Trump represents to our country.