By Deja Goode, Melody Blazauskas on October 4, 2019 in Sports, Volleyball 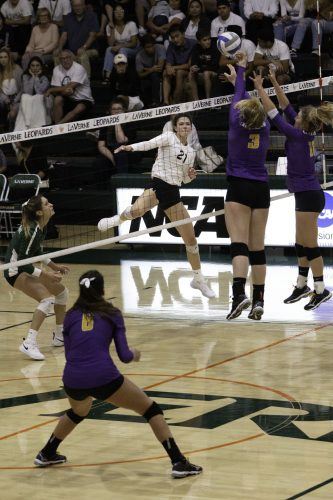 Regal sophomores, middle blocker Maci Haddad and outisde hitter Madison Karcich, go up to block a spike from Leopard sophomore outside hitter Hayley Celaya in La Verne’s game against Cal Lutheran Sept. 28. The Leopards took the match 3-1 and improved to 4-1 in SCIAC. / photo by Melody Blazauskas

The women’s volleyball team beat Cal Lutheran 3-1 in an exciting game on Saturday in the Frantz Athletic Court.

“We practiced all week for this team,” freshman right side hitter Camryn Sievers said. “We came out with our fiery passion and I think our passion drove us to the win.”

The Regals came into the contest 3-1 in the Southern California Intercollegiate Athletic Conference. The winner would secure sole possession of third place.

The first set was rough for the Leopards defensively as the Regals pushed forward with a big ten-point lead putting the score at 11-21.

However, the Leopards did not give up, managing to come back with a seven-point push. With four kills and two aces, they were back in the game.

Sophomore outside hitter Haley Celaya created momentum with two big kills. However, Cal Lutheran closed out the set with a final score of 25-20, after a notable comeback for La Verne.

La Verne made some incredible offensive plays in the second set. Senior setter Madison Maynes fired up the audience with a few strategic tips earning impressive scores for the team.

La Verne’s defense was a key factor in this set, as they worked together creating a solid rhythm and executing their players to their fullest potential.

Freshman Emily Heldenbrand led the team in many incredible plays making her quite a force on the back line.

Despite a small struggle with being able to keep up with Cal Lutheran defensively toward the beginning of the second set, Heldenbrand powered through with a focus and a drive that could not be slowed down.

“I feel like this wasn’t my best game and I definitely could have done better,” Heldenbrand said, “We powered through and that’s all that matters.”

Heldenbrand has notched 90 digs and eight kills, an impressive achievement for a first-year athlete so early in the season.

The Leopards dominated in the second set with an intensity that brought excitement to the game. Cal Lutheran managed to close the lead, but La Verne still came out on top.

Both teams battled offensively in the third set. La Verne scored 13 points in kills, firing up the audience as “Let’s Go Leos” echoed throughout the tents.

Sievers became a key player in the third set, scoring the first kill for the Leopards and setting the tone for the team.

Sievers’ energy showed and successfully created an exciting dynamic on the court.

After the Leopards took the third set, the score stood at 2-1. Cal Lutheran came out hard as they were determined to turn the game around. The score in the final set was close the entire time as each team went back and forth with ball possession.

However, the Leopards closed out the final set with a big block from Mayne, securing the win against the Regals 3-1.

The team cheered in the middle of the court after the final play, never looking stronger.

The Leopards improved to a 10-6 overall record and 4-1 in SCIAC following a close 3-2 win over Whittier. They will face Chapman at 7 p.m. Friday at the Frantz Athletic Court.

Poet blends reality, fantasy through surrealism
Trump’s behavior catching up to him