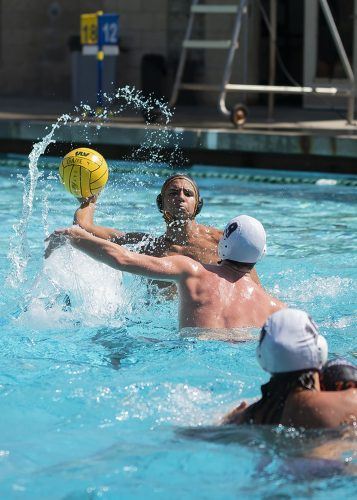 Unfortunately for the Leopards, they were unable to respond to the loss and could not pull off a victory in any of the four games they played. Losing to the Concordia Eagles, 22-15, the Santa Clara Broncos, 17-12, and the Fresno Pacific Sunbirds, 11-9.

The tournament included 40 total games, featuring 22 schools from all over the country. High profile schools such as the United States Naval Academy were also featured in the tournament.

The game started out in favor of the Leopards as freshman attacker Alam Barnuevo was able to find the back of the net to give his team an early lead.

It would be the Leopards only lead of the game. Chapman would respond quickly with two goals of their own to take and own the lead for the rest of the game.

Chapman held a 4-2 lead midway through the first quarter. At this point of the game the Panthers were able to gain momentum by suffocating the Leopard’s offense, which led to easy counter attack goals.

Chapman’s senior goalkeeper Wesley Hertel looked like a brick wall in the cage, stopping every attempt thrown his way by the Leopards offense.

La Verne found themselves down 6-3 at the end of the first quarter.

Action picked up in the second quarter, both teams began to play very physical on defense while still able to create successful chances on the offensive end. But no matter what the Leopards tried, they could not catch up with Chapman.

“We struggled to keep to our game plan,” said senior goalkeeper Mason Fox. “We played very well physically, we just couldn’t execute the way we wanted to.”

At halftime, the Leopards were down 10-7 to the Panthers.

Chapman began the second half much of the same way that they had played all game, scoring twice right out of the gate and increasing their lead early.

“We played our game to one point, then it just became a mental game,” said senior center Vasil Halchev. “At one point we just lost our cool, let our emotions rise out of us and let them drive the game instead of us dictating what needed to happen.”

“We lost our cool, and I think that affects our overall gameplay,” said senior attacker Kristofer Grigorian. “We start to get agitated and it leads to mistakes which basically turns into a snowball effect.

The fourth quarter got ugly for the Leopards as they could not stop Chapman despite several defensive miscues by the Panthers.

With every Leopard turnover, Chapman would counter with long passes that often put the goalkeeper in a one on one situation with the attacker. Chapman capitalized on nearly every opportunity.

La Verne then went on the road to play Redlands Wednesday, but however would fall short against the Beavers, dropping the game 13-10.

Despite matching the Bulldogs early scoring in the first half, with numerous goals from senior utility Charles Ortega, senior center Rex Sample and Halchev, things fell apart for the Leopards in the second where they allowed Redlands to score five unanswered goals.

The Leopards’ next match is at 11 a.m. Saturday against the Pomona-Pitzer Sagehens at the La Verne Aquatic Center where they look to upset the defending SCIAC champions.