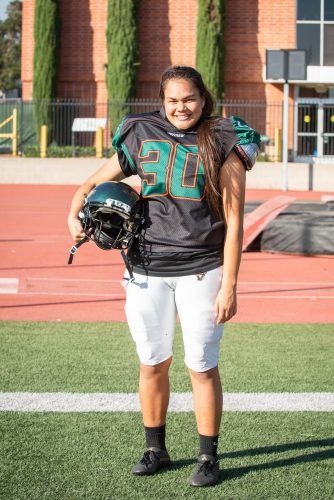 Freshman Kyeesha “Mika” Makekau has adapted nicely to the collegiate level in her first season and has fully embraced her new role as kicker on the Leopard football team. She made her debut Sept. 7 with a 26-yard field goal against Whitworth. / photo by Katelyn Keeling

Kyeesha “Mika” Makekau, a native of the state of Hawaii, arrived at the University of La Verne this semester to become the first ever female football player.

To summarize how her first semester at the university has been going, it has been nothing short of amazing.

“I have no complaints so far,” Makekau said. “Everyone is pretty welcoming, it’s a nice community to be part of. It’s been great!”

She played football at the ‘Iolani School in Honolulu, Hawaii where she set the state record for the longest field goal ever kicked by a female football player, 44 yards.

For her, the transition from high school football to the collegiate level has been exciting.

“It’s definitely different from high school, college expectations are way higher than it was in high school,” Makekau said. “But the coaches, the players, and the whole football program have been easy to work with so it’s been nice.”

According to Max Preps, Makekau is the 15th female football player in college football history.

With a number of historic accolades already under her belt, Makekau has been handling the pressure and attention well.

Leopards’ defensive backs coach and fellow native Hawaiian Devin Carillo was one of the first to get in contact with Makekau during the recruiting process and has witnessed her growth from day one.

“Watching her from when she first stepped foot on campus, she’s come outside of her comfort zone. She used to be very, very, quiet,” Carillo said. “But now she’s more playful, she’s more comfortable around her teammates. With that she’s building brotherhood and sisterhood.”

Having a woman on the football team provides head coach Chris Krich with different challenges that he has taken head on.

These challenges include how he usually addresses the team, and having to figure out logistical things such as where she dresses or stays on away trips.

“It’s awesome to have this opportunity to have a change to this sport, and to have Mika have the opportunity to come out here and showcase what she can do,” Krich said.

Krich said he has also noticed the growth and camaraderie that Makekau’s presence has brought to the team.

“She brings a whole other level to the family atmosphere to our program,” Krich said. “The morale she brings is unmatched. We really enjoy having her on this football team.”

Although Makekau is not the starting kicker on the active roster, she has learned a lot from working with junior place kicker Diego Garcia.

“She’s like a little sister. We treat her like one of the guys,” Garcia said. “She’s one of us, she works just as hard as everyone else, she completes the same workouts. She’s just one of us.”

The family bond that the team shares with Makekau, has helped with her being away from her family back in Hawaii.

“I would always look to my family in the stands, whereas here they’re not at every game,” Makekau said. “It’s nice to know you have your family supporting you, but now that I’m in California I have my own family to look forward too, and that’s my team.”

Makekau had her first taste of action at the collegiate level by drilling a 26-yard field goal at the end of the Leopards’ 50-24 loss to Whitworth Sept. 7.

“I was really nervous between the crowd and everyone around me because I wasn’t expecting to kick that field goal,” Makekau said. “There were nerves running through my body, especially when the commentator talked about me making history at that moment.”

“When she hit that field goal, in the first game, the entire stands, everyone in that stadium felt that energy, that excitement for her to be able to go out and do that.” Krich said.

The following week marked another historic moment when the Leopards faced off against the Willamette Bearcats as it was the first time in college football history where both teams had a female football player on their active roster.

While Makekau did not play, the game still drew media attention. Especially from two-time Women’s World Cup champion Carli Lloyd, who gave a shout out to the two players via social media the morning of the game.

“You both are doing great things for women in sports and I’m proud of you. May the best team win, but hopefully all the kicks go through the goal post this weekend.” Lloyd said in her Instagram video.

“It was very humbling because I didn’t find out first hand that she had shouted us out,” Makekau said. “I was very humbled and excited to play the game. I’m glad we won even though I didn’t get to play. It was exciting.”

There are still plenty of opportunities for Makekau to show us her incredible talent, but also continue to build a legacy at the University of La Verne for all future female athletes to follow and inspire.

Leopards accelerate toward SCIAC
Artist finds his art through nature