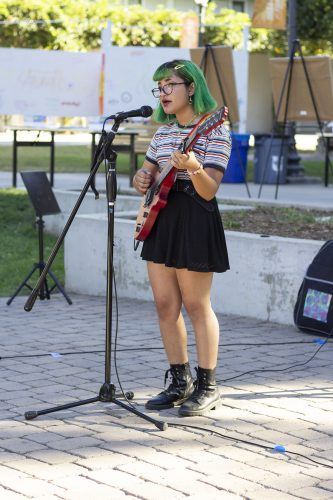 Iris Dallas performing at Rallying Cry on Saturday in Sneaky Park. The event was part of senior theater arts major Mallorie Johnson’s senior project to help Joyful Heart’s Policy and Advocacy program called End the Backlog as a way to raise awareness of the backlog of rape kits. / photo by Melody Blazauskas

End The Backlog is an initiative based on research identifying the extent of the nation’s backlog of rape kits while trying to help eliminate the amount left untested, essentially eliminating the issue of denying justice on behalf of the victim.

According to End The Backlog’s website, endthebacklog.org, there are two ways in which a backlog of rape kits occurs.

The first occurrence involves collected rape kits that are booked into evidence with no request for DNA analysis, remaining in the police evidence storage facility indefinitely.

The second occurrence happens within the crime laboratory where rape kits are submitted for testing and awaiting DNA analysis, however, the kits are not being tested in a timely manner.

“This topic is so prevalent, especially on a college campus,” Johnson said. “A lot of women, even men, I have met have their own story or knows someone that does. It’s something we don’t talk about because it’s uncomfortable and scary but the misinformation is what feeds into the issue.”

Sexual Assault Victims’ DNA Bill of Rights, also known as SB22, was passed in March and requires all newly collected rape kits from medical facilities to be sent to a crime lab within five days, booked for evidence within 20 days and tested within 120 days after the initial receiving of evidence.

“To eliminate this backlog will help law enforcement get ahead of this issue,” Johnson said.

Johnson expressed that it was never about how many guests showed up to the event, rather it was about how many people were willing to have an honest and relevant conversation regarding the topic.

Dynasty Nakatani, alumna, showed her artwork at the event.

“I am not a survivor but everyone knows a survivor,” Nakatani said. “It means so much to end that suffering for people who have not found justice yet.”

Nakatani’s largest piece titled “These Hands Are Not My Own” portrayed a naked woman’s body with hands covering her eyes and her arms branched out like tree branches.

Overall, around 20 differing hands were placed throughout the piece. There were also two hands on each of the woman’s thighs, falling in line with the theme of the event.

“This painting has to do with feminism, the idolization of the female form,” Nakatani said. “It has to do with women’s rights, hands on the body, and lack of control. It’s a painting that came from the heart.”

Guests were also offered a chance to custom make their own jewelry with Jane Duran, senior communications through the arts major.

“This event means a lot to me but it really means women empowerment, especially since I know a survivor,” Duran said, “It’s just so nice to see everything here today, and willing to help out End The Backlog.”

Alumnus Jack Bowman also had a personal connection to the event.

“I am personally familiar with several survivors and their stories,” Bowman said. “It’s such a vulnerable place for them to be in and when there is not a certain law provided to them it’s such a travesty.”

A white board in Sneaky Park held various questions for guests to ponder over while attending the event, such as “What does healing mean to you?” and “What does strength mean to you?”

Guests wrote varying phrases and answers on the board consisting of empathy, being vulnerable, not hiding, and confrontation.

“I really support bringing awareness and having a gathering place for people to come and enjoy with like minds,” Bowman said.