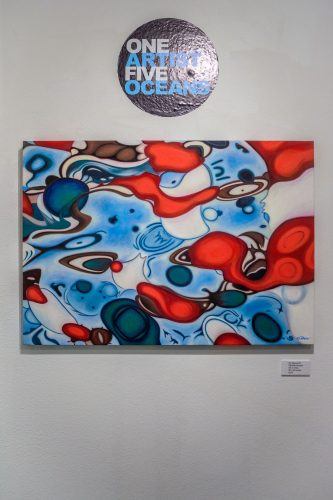 Danielle Eubank presented her exhibit “One Artist Five Oceans” at the C Gallery Fine Art in Long Beach on Saturday. The exhibit runs through Dec. 15. Prints of her work will be on display at the Aquarium of the Pacific through Jan. 5. / photo by Veronyca Norcia

Danielle Eubank debuted her “One Artist Five Oceans” exhibit at C Gallery Fine Art in Long Beach during an opening reception on Saturday night, as part of the Long Beach Art Walk.

Eubank has spent the last 20 years traveling the world’s five oceans painting the differing waters in an attempt to raise environmental awareness throughout the process.

Eubank began her journey in 2001 with the Atlantic Ocean, however, she said it was a national sailing expedition that allowed her to really see just how different the waters looked in the varying oceans.

“I got to see a lot of different water and I started to ask myself, ‘how is it so different?’” Eubank said. “It was really, really different from the way the Pacific looks. That’s how the collection started; it came really naturally.”

C Gallery owner Charlene Palmer, who is also a civil engineer with a degree in environmental science, helped Eubank reach her goal after only being $500 short from the amount needed to travel to Antarctica.

She described Eubank’s work as the perfect combination of science and art, and wanted to come together with Eubank in an attempt to not only raise environmental awareness, but to fundraise for the Aquarium of the Pacific and Cal State Long Beach’s shark lab through their “Ocean Resiliency” fundraiser.

“We started talking about this and a couple of months ago we came up with this idea to approach the aquarium,” Palmer said. “It all just seemed to fall into place. This is both of our ways of giving back and trying to do something for the greater good, but we also wanted to bring it down from such a big picture to what each individual can do to help even just a little bit in this combined effort.”

Eubank’s original work is featured in the gallery while prints of her work will be featured at the Aquarium. The Ocean Resiliency fundraiser took place on Tuesday featuring a panel discussion, reception and a presentation featuring a film portraying the last 20 years of Eubank’s painting journey.

Much of her work on display resembled actual photographs. The water looked as though you could reach your hand in and touch it, with some images portraying vivid detail so closely that reflections from buildings or boats could be seen in the painted water, like the yellow boat in her piece titled “Henley Royal Regatta V.”

“The yellow boat with the reflection, I was really drawn to it. I’m not usually drawn to yellow, but it just spoke to me,” Sonya Ontiveros, Long Beach resident, said. “It’s really cool because she took the time, several years, to go to each of the oceans. Even just 20 years ago they’re way different than they are now because of climate change.”

Eubank’s piece titled “Ny Alesund III” featured contrasting colors of orange, brown and varying blues with hues of turquoise against a white background looking similar to the shapes you would see floating around a lava lamp.

This piece was Eubank’s 10-year-old daughter Severine Beasley’s favorite piece. She occasionally spends her time in her mother’s studio and described the process of her mother’s work as starting off with a base coat that leads to the incorporation of charcoal lines, sometimes working in small designs for her daughter throughout the process.

“Sometimes she adds in little designs for me, like a ladybug in this one, since it’s always been my favorite animal,” Beasley said, as she pointed out a small ladybug shaped blob of red orange on the piece.

The piece features hues of blues, browns and soft yellows throughout ripples of water, portraying some kind of reflection although of what specifically is hard to tell with how many ripples are present.

“I can sit here and just stare at it forever, it has a lot of depth and it looks like a photograph,” Rosales said. “The distance you have between the piece gives you a different angle and a different perception of the piece.”

Prioritizing mental health for all
U.S. support in WWII discussed