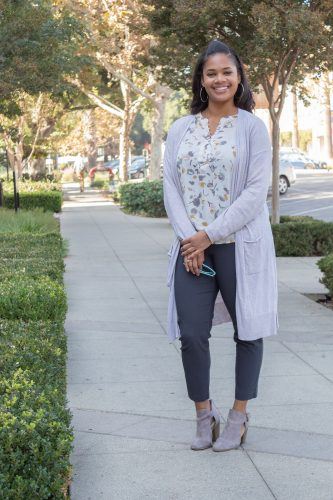 Alexandra Burrel, assistant director of the Office of Diversity and Inclusion, plans to bring her background in higher education to the University of La Verne. She has already begun working to understand the multiple perspectives on different issues to encourage healing and build trust./ photo by Ariel Torres

Alexandra Burrel started recently as assistant director for the Office of Diversity, Equity and Inclusion.

Following a summer search, Burrel was selected for the job among applicants across the nation.

Much of her past work centralized upon student affairs, such as at Howard University where she held the position of assistant dean for enrollment and student affairs and acted as a liaison between students and faculty.

While at Morgan State, she was the lead coordinator for an access program within their college of nursing, and while at Michigan State she said they dealt with students from inner city schools who ranked top of their class. A majority of them were minority students of black and Latinx culture who were predominantly female, she also mentioned.

“A lot of the curriculum was founded in social justice advocacy and dealt with diversity, inclusion, calling out our unconscious biases, things like that,” Burrel said. “A lot of it was not just in the classrooms with our students, but also serving as a hub within the school of education to provide social justice competency and conversations with other faculty.”

Aside from past employment, her doctorate research has focused on black and Latinx female undergraduate students, their perception of campus climate while attending predominantly white institutions and how that perception affects their still developing identities.

At only three weeks into her new position Burrel was already in the midst of what she called a “walking and listening tour” to help her get a better understanding of the various perspectives regarding campus climate around the University.

She said this is her attempt at establishing the groundwork for the new chief officer of diversity, equity and inclusion that the University is currently searching for.

“I would characterize that as wise, stepping into the space. You absolutely need to understand the culture,” Daniel Loera, director of multicultural affairs, said. “To have the best understanding you can when walking into a new situation, it’s very smart. I think she’s approaching it very methodically and in a very wise way to try and understand the history so far.”

Burrel said that she is using her walking tour as a way to hear multiple perspectives in order to create an overall narrative of the differing viewpoints across campus that will then be used as part of an initial report she is putting together for the new chief diversity officer.

As opposed to coming in and being told what the campus community needs, she said she would rather have the conversations herself in order to understand the actual needs of the community.

“That person will then establish the vision for this office. My goal leading up to that point, is to do an initial assessment of the climate from the perspectives of students, staff, faculty and administration to get an idea where they see us now and where they hope for us to go as a community,” Burrel said. “I’m looking forward to it.”

The committee that came together for the search consisted of various representatives from several areas across the University such as the Office of Human Resources, the Office of the President, ROC and the online campus, Campus Safety, as well as from the Office of Multicultural Services and other various student affairs offices.

Representative for the Office of the President in the committee, Shannon Capaldi, said that after a national search and several applicants, the committee began with Webex interviews due to the fact that many applicants were from out of state, including Burrel. What the committee was looking for was an applicant who was both knowledgeable and up-to-date on the issues of diversity while still keeping in mind that diversity, equity and inclusion are constantly evolving, she said.

“We found, through our interviews, that Alexandra was all of those things,” Capaldi said. “She was very knowledgeable, passionate and interested in those things. The University of La Verne’s values spoke to her own personal values, and her personal and professional interests.”

“She had the qualifications on paper, she interviewed beautifully, and it seemed like she would be a great fit at the University of La Verne. I believe she is approachable for students, staff and faculty. That’s incredibly helpful when you’re trying to do a lot of work with a lot of different constituencies,” Capaldi added.

Last academic school year, the Office of Diversity, Equity and Inclusion was part of the Office of the Provost. According to President Devorah Lieberman, the vice provost held the responsibilities of both the provost office and the diversity office, however, once the Ludwick Center for Spirituality, Cultural Understanding, and Community Engagement is open it will be restructured into a stand-alone office separate from the Provost.

“Because it’s being restructured, we have the opportunity to fill in some gaps and to improve on the communication and collaboration across campus,” Burrel said. “There are a lot of great things happening in pockets that not many people are aware of. Unfortunately, not everyone is aware of the greatness that the campus holds.”

Burrel hopes that with the reconstruction of the office she can build some bridges, fill in some gaps and help with the healing that is necessary to rebuild trust through the process of becoming a more inclusive and welcoming campus overall.

With what she has gotten through the midst of her impromptu walking tour, Burrel has learned that people all across the University still have hope. Although there are areas of improvement to be made in regards to communication across all lanes, Burrel believes the University has a great foundation to build and grow upon.

“We want her to be listening about diversity, equity and inclusion issues across the faculty, staff and the students,” Lieberman said. “When the new chief diversity officer arrives, she will already have that office up and running so they can take the lead on diversity initiatives for this campus with the appropriate offices and she will be the partner to the chief diversity officer.”