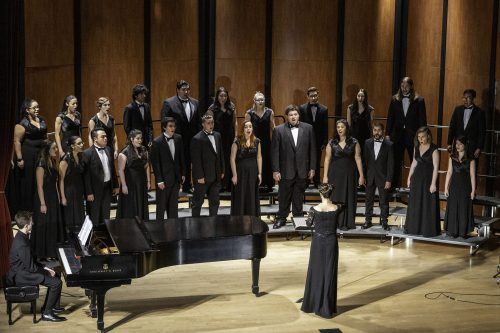 The University Chorale and Chamber Singers perform “The Road Not Taken” Friday in Morgan Auditorium. Led by choral director and Associate Professor of Music, Voice and Chorus Irene Messoloras, the choir sang about a range of topics from different walks of life. The Chorale will perform a Holiday Spectacular musical event from 4 p.m. to 6 p.m. Dec. 8 in Morgan Auditorium. / photo by Melody Blazauskas

The University Chorale and Chamber Singers presented “The Road Not Taken” Friday in Morgan Auditorium. The purpose of the concert was to create a conversation about the hard decision we all make, which can impact our lives.

The poem “The Road Not Taken” by Robert Frost follows the speaker who faces an obstacle in his life forcing him to deliberate between two paths: the familiar or the unfamiliar path. He ends up taking the road less traveled which makes a world of difference.

“There are lots of themes and concepts about this poem, but one of the main themes is about choice. Choices that we make in our life and how that shapes our future,” said Associate Professor of Music, Voice and Chorus Irene Messoloras.

The performance was a collection of ideas from different walks of life that is highlighted through the range of music chosen. The different tones, tempos and emotions accent the words, which brings the story to life.

“Tonight’s music will focus on … concepts of love, concepts from faith and spirituality and the relationships we have with one another,” Messoloras said. “All of these are different choices. Some of them are difficult choices and we encourage sometimes taking that road less traveled because it could make a difference.”

The University Chorale and Chamber Singers are made up members from all walks of life, whether they are music majors or not. For many of the students this was not only their first performance this semester, but also their first college performance.

Messoloras expressed her gratitude to the students preforming, because she is inspired by the level of commitment and talent this group of students have shown her.

“One of the things that we struggled with at the beginning was so many of the people are new to this choir,” said tenor Thomas Del Carmen, senior liberal arts major. “This year the voices are different. [Irene Messoloras uses a tactic] where she forces us to blend the sounds with the new voices.”

The women’s choir performed “Down by the River to Pray” by Jace Wittig and blew away the over 300 in attendance, as they got an explosion of applause in response.

“It reminds us that mothers, fathers, sisters, and brothers are all called together as one and what the road less traveled seems daunting, we are not alone, but rather we will move forward together,” alto Valerie Trujillo, senior education major, said.

The men’s choir preformed “Glory” by Eugene Rodgers, a spiritual song that allows the singer to highlight their voices and the soul they carry in their music. The senior tenor bass duo of Jacob Ruiz and Del Carmen crushed the piece by using continuous riffs throughout the melody.

“My favorite song had to be the men’s song ‘Glory’ because I tend to put a lot of feeling and emotion into the music,” Del Carmen said.

The musical highlight of the night was “Kalinda” by Sydney Guillaume which started off as impromptu a cappella as the choir switched lanes into one harmonious note. The chambers singers were responding to the conductor’s cues as if they were under a trance which carried into the next song, “Blackbird/I Will,” arranged by Jonathan Rathbone.

The Chorale then joined with the Chamber Singers and performed “It Takes a Village” by Joan Szymko, which depicts a community jumping into action to support one another. By creating a sense of culture in becoming a part of the community you support more than just yourself.

“In this peace, we sing of hope always looking for healing in the near future, we try to spread the message of unity and hope of always looking forward to a better tomorrow,” freshman tenor Mitchell Calderilla said.

“The Road Not Taken” creates a conversation for those reading or listening while you think what would have happened if you had taken the other path. Although it highlights the fact that the choices we make in our own life shape who we come out to be in the end.