By Danielle De Luna, Jaycie Thierry on November 15, 2019 in News 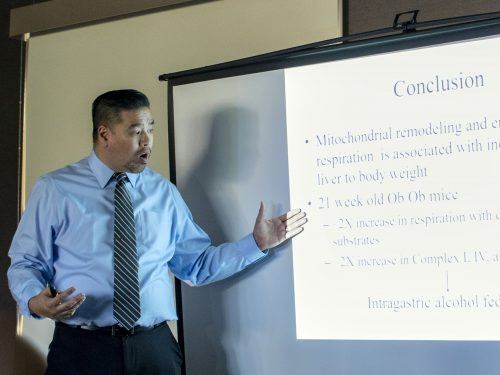 Jerome Garcia, professor of biology, shares his research on the mitochondria’s impact on obesity, during the faculty lecture series Tuesday at the Executive Dining Room. Garcia shared the concerns weight gain can have on a person’s emotional and physical health. / photo by Danielle De Luna

Jerome Garcia, professor of biology, discussed his studies of the mitochondria’s ability to enhance respiratory capacity and its role in obesity Tuesday in the Executive Dining Room.

Specifically, he looked at the consequences of gaining weight modeled through the study of 6 and 21-week-old mice.

“Why should we care about this particular health risk?” Garcia asked. “Last year, (obesity) in health cost us about $100 to $200 billion and that’s just in the U.S.”

Garcia’s experiment and studies were modeled after a previous one performed on mice.

Garcia, with a team of University students and colleagues from the Keck Graduate Institute, observed how the hormone leptin, which regulates the balance of energy and hunger in the body, played a role in weight gain.

They found statistical significance in their results, concluding that putting on weight, like drinking alcohol, could target certain areas of the body, like a fatty liver found in some of their mice.

Many in the room were interested in how Garcia’s research could translate to the human body, including Aghop Der-Karabetian, emeritus professor of psychology.

“How does this research affect the evolutionary perspective that we accumulate fat, reserve energy for days that we will have famine?” Der-Karabetian asked.

Garcia suggested that organ percentage to body ratio is what becomes critical.

“There are areas where you are supposed to store fat, but not on your organs,” Garcia said.

“That is, in my opinion, the first step where when you get to that stage you’re crossing the point of no return towards those diseases we talked about earlier.”

Garcia said that stress plays a factor in weight gain. He asked those in the room who eats comfort food when feeling overwhelmed. Nearly half of the room raised their hands.

“If you’re having an emotional or psychosocial influence, realize that there are actually hormones and chemicals being released by your body that are associated with that stress,” Garcia said.

“Your body will actually crave those things, like ice cream and soda, because it’s an association during these emotional situations.”

Sophomore kinesiology major Dexter Sapien shared previous knowledge of the leptin hormone with the group, having found from reading that leptin is being injected into the body to manipulate mitochondria, increase body heat and serve as a quick fix to lose weight.

“It targets tissue and browns it which increase mitochondrial volume and uncouples proteins,” Sapien said.

Garcia said a process like that which speeds up metabolism to burn off fat would be a double-edge sword.

“Yes it gives you energy in the form of ATP, but it can form other free radicals that can be very toxic,” Garcia said.

“So if all of a sudden you see people spontaneously combust, they’ve been leptinized because so much heat has been generated,” said Ngoc Bui, professor of psychology.

Garcia suggested that although that is a very extreme possibility, nevertheless it could be possible theoretically speaking. Garcia received a generous grant to continue his experiments, which he will pursue while on sabbatical next semester.

Garcia plans to study the relationship of mitochondria and cancer cells, as well as reenact the mice model from his lecture’s study to evaluate what happens to mitochondria when the body is given alcohol.

Nostalgia rides the rails at Fairplex
Music Review: The resurrection of Yeezus