By Campus Times Editorial Board, Danielle De Luna on November 1, 2019 in Editorials, Opinions 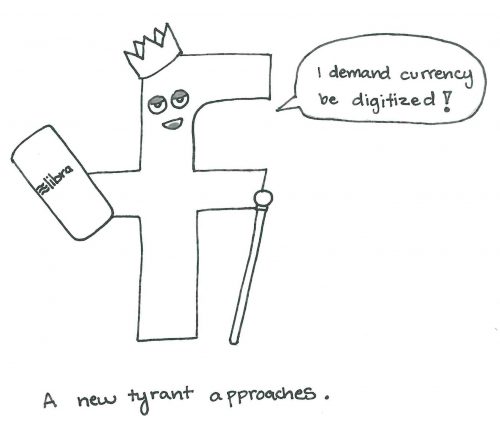 Facebook has announced its plan to incorporate another way to send people money, bank online and purchase goods and services through its new feature, Libra Cryptocurrency.

Facebook is one of the leading corporations in the world. It has so much influence on much of today’s social climate and media that incorporating this new online banking feature brings major concerns to the surface.

Facebook has continuously tried to take over the social internet world. Facebook owns 79 other companies, which inevitably means their influence impacts people constantly.

Libra Cryptocurrency is money that exists purely through the internet, one can deposit money into their Libra app and then they can use that money through the app to pay others and businesses.

It is not like Bitcoin, although it may be an internet friendly currency. It holds monetary value and can hopefully be used for the majority of purchases.

There are currently 28 businesses interested in pitching in money to the Libra Association, which holds 100 spots.

This plan of action is not secure in the way that the companies invested can easily pull out of the contract, dissolving the Libra Association.

Facebook has recently been under fire due to their questionable acts of protecting people’s privacy. With the implementation of the banking, Facebook has stated that everything will be anonymous and will be protected information.

What once started as a website to rate images of women has spiraled out of control where they are trying to grasp every at corner in society that they can. Introducing Libra Cryptocurrency is another way that Facebook is trying to reach out to the masses.

Facebook has the power to control the media because of its strong influence over the masses. The cryptocurrency is merely another example of Facebook striving to gain control over the people.