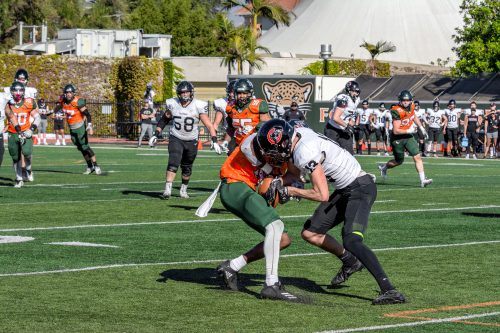 Senior Day did not go the way the Leopards hoped for as they lost their season finale to the Chapman Panthers 28-17 at Ortmayer Stadium on Saturday.

The loss gave the Leopards a final record of 4-6, along with a 3-4 record in the Southern California Intercollegiate Athletic Conference.

Prior to kickoff, the university held a pregame ceremony to honor all of the seniors on the football team. It was a special moment for athletes and their families to enjoy one final moment on the field together.

Another special moment happened right after kickoff as the Panthers declined an intentional delay of game penalty on the Leopards. The purpose of the penalty was to give senior offensive lineman Manuel Dorado , a player who was injured earlier in the season, a chance to be on the field with his teammates one last time.

Finally, the game began. The Leopards offense was held to a quick three and out to open things up before sophomore wide receiver and punter Arturo Herrera-Caballero was able to convert the fourth down on a risky, yet rewarding, fake punt run that gave the Leopards a fresh set of downs.

Two plays later, senior quarterback Matthew Albright connected with senior wide receiver Jordan Moore on a 57-yard touchdown pass to give the Leopards a 7-0 lead early in the first quarter.

“It was a great feeling knowing that this was my last collegiate game and I was able to get a long bomb and get it in the end zone. It felt great, nothing like it.” Moore said on his final touchdown as Leopard.

The Leopards defense capitalized on the following drive as junior cornerback Raymond Moronez was able to pick off junior quarterback Jonston MacIntyre for the first of 12 turnovers from both teams.

Moronez, who finished the day with four tackles and three interceptions and was named to D3football.com Team of the Week, was fueled by the memory of his high school head coach Lou Farrar, who passed away earlier in the week.

“All week he’s been on my mind ever since the passing. Today I wanted to dedicate that to him.” Moronez said. “He’s one of the main reasons why I’m here at this school today doing what I love, so today was for him.”

The Leopards offense couldn’t find the end zone after Moronez’s interception, but were able to add three points to the lead after a 19-yard field goal from junior kicker Diego Garcia gave the Leopards a 10-0 lead midway through the first quarter.

The Leopards saw their lead quickly fade away and witnessed Chapman take a 21-10 lead by halftime.

One of the big issues the Leopards offense faced was multiple failed opportunities to score once they had the ball inside the opponent’s 10-yard line.

Finally, in the fourth quarter, the Leopards found the end zone one last time as Albright connected with senior running back James Gonsalves for a two-yard touchdown pass. Gonsalves got the drive going earlier on a 55-yard run helped set the Leopards up deep in Chapman territory.

“I kind of knew that was my final play, I’m glad I got a touchdown. It was emotional.” Gonsalves said on his final touchdown.

The Leopards couldn’t catch up to the Panthers and lost their final game of the season 28-17.

The Leopards have improved their win total each year since they won the conference in 2015. That season the team finished with an 8-2 overall record.

“This game and this year helps propel us into next season. This game has left us with a hunger of what could be,” Krich said. “For those returners, hopefully their excited for the work that’s ahead of them and what they’re going to have to do to accomplish the goals we want to set. We want to be a conference champion and we want to be a national champion. So, why can’t we?”