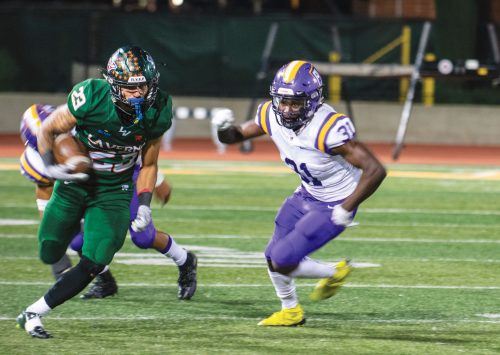 The Leopards fell short of an incredible comeback, losing 20-15 to the Cal Lutheran Kingsmen at Ortmayer Stadium on Saturday.

The loss gave the Leopards a 4-5 overall record and a 3-3 record in the Southern California Intercollegiate Athletic Conference.

The loss also dropped the Leopards from third place in the conference to fifth.

The Leopards came into this game following a 27-20 victory at Occidental the previous week.

On the first snap of the game, senior quarterback Sam Taylor ran for 42 yards to bring the ball to the Cal Lutheran 33-yard line.

Unfortunately, the drive ended a few plays later after Taylor threw his first of three interceptions.

Cal Lutheran scored the first points of the game after a short, rushing touchdown by freshman fullback Reid Huseman, giving the Kingsmen a 7-0 lead late in the first quarter.

Huseman got the Kingsmen in scoring range after a 27-yard rush where he snuck out of the backfield and was able to break free.

After the play, a penalty on the Leopards defense put the ball on the 4-yard line.

Turnovers hurt the Leopards throughout the game, as Sam Taylor and freshman quarterback Chris Venegas combined for five total turnovers within the first three quarters.

The Kingsmen added to their lead in the second quarter after freshman quarterback Hector Gonzalez found the end zone on a 10-yard touchdown run, giving the Kingsmen a 13-0 lead.

The Leopards were finally able to get some points on the board after senior cornerback Torii Hilbert blocked senior kicker Christian Antezana’s extra point attempt and junior cornerback Raymond Moronez was able to recover the ball and find the end zone to give the Leopards two points.

“The first time they kicked a field goal, I almost blocked it myself. So, I told my teammate Torii that he could definitely get to it,” Moronez said. “As soon as Torii blocked it, I saw it. I was already tired at this point, but I picked it up, ran as fast as I could and was able to score.”

Moronez ended the game with 11 tackles and one interception. Moronez’s efforts earned him SCIAC honors for the week.

The Leopards continued to struggle scoring throughout the game and soon found themselves down 20-2 midway through the fourth quarter.

That’s when things took a turn in favor of the Leopards.

Head coach Chris Krich decided to bring in senior quarterback Matthew Albright to try and add a spark to the offense.

The decision to bring in a new quarterback paid off on the next drive as Albright was able to find the end zone after a 42-yard run to make the score 20-8.

Albright was not expected to play in this game.

“I’ve been battling an injury since the Redlands game. I haven’t been practicing or throwing much.” Albright said. “They said if they needed me this game, to be ready to go. I feel like I was, I prepared pretty well. Once the adrenaline got pumping, I couldn’t even feel pain.”

With time playing a vital role at this point, the Leopards needed their defense to come up big in order to buy the offense more time.

And that is exactly what they did on the following drive, as the defense forced the Kingsmen to punt the ball after three failed attempts to convert a first down.

On the ensuing drive, Albright was able to find junior receiver Jared Beamon open in the middle of the field to complete a 71-yard touchdown pass to bring the Leopards within five points late in fourth quarter.

“I told my receivers coach that they’re starting to open up things from other guys being covered,” Beamon said. “That’s what it takes, when certain guys start doing certain things and start over guarding somebody. That’s when it’s time for someone to step up and start making plays like that.”

The Leopards regained possession of the football late in the game and found themselves in striking position to take the lead.

On a crucial fourth and one play, Albright rolled to his left and found an open Jordan Moore in the back left corner of the end zone.

Moore caught the ball, but had it stripped from his grasp by an opposing defender.

The result was a turnover on downs and the Leopards would lose 20-15.

“We did well, but we didn’t do well enough to win the game,” Krich said. “When it comes down to heart, determination and always believing, I think we did a heck of a job. That’s something you can’t coach.”

The Leopards will try to end their season on a positive note as they take on the conference leading Chapman Panthers at 1 p.m. Saturday at Ortmayer Stadium.