By Eric Rangel, Rex Sample on November 15, 2019 in Basketball, Sports 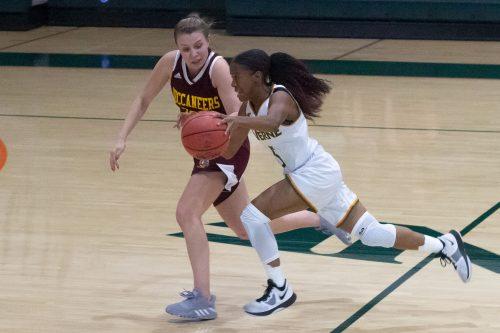 Sophomore guard for the Leopards, Jazzlyn Johnson, pushes through Buccaneers guard Daniela Bernal in ULV’s game against Park University on Friday night. The Leopards came up short in the double overtime thriller 107-105. / photo by Eric Rangel

The women’s basketball team battled until the end of double overtime in their first game of the season, but came up short 107-105 against Park University Gilbert Buccaneers on Friday at the Frantz Athletic Court.

Although the game started slow on both sides, it was redeemed by consistent Leopard defensive pressure pushing Park University Gilbert back to their own half.

La Verne also had 20 turnovers which lead to scoring opportunities that got broken up or died out.

“We had 20 turnovers, we committed 40 personal fouls and we were 26 of 41 from the free throw line. That’s the game,” head coach Jason Pruitt said.

Both teams found it hard to convert on the offensive side, but were coming up with defensive rebounds to hold the game at a standstill.

Park freshman guard Elise Young was able to take the lead to start the game from an explosive attack to convert the layup.

Sophomore guard Jazzlyn Johnson was the first Leopard to get on the board after making her first free throw.

“My mentality for tonight was work hard, play hard, play together and communicate to be aware at all times,” Johnson said.

The Leopards were slow to start but were able to find their groove after strong defensive plays.

A series of defensive stops and rebounds gave the Leopards the opportunity to take the lead of 16-24 La Verne going to the second quarter.

“The game plan was to come out as hard as we could, it’s not exactly how it went. Our first group, the starting group came out flat. We knew the second group came out even harder,” junior forward Alondra Ponce said.

The Leopards defense was struggling to keep up with the all-out attack of the Buccaneers.

At the start of the second half, Park came out with an offensive push. The Leopards defense was able to contest the Buccaneers but it just wasn’t enough.

This made the Leopards step back and rethink what they needed to do to win the game.

Ponce led the Leopards in scoring, recording 15 points, two rebounds and an assist.

Freshman guard Rachel Gafford nearly finished with a double-double on the night with 13 points, eight rebounds, three steals, an assist and a block to help push her team into overtime.

“With this game, it showed us that we need to have court vision. We need to be listening to the coach at the same time,” Gafford said. “We have to listen to him and it is just going to be a developmental game every time.”

Throughout the two quarters of overtime the Leopards and Buccaneers traded back and forth never allowing the other team to be more than a three behind.

The Leopards were able to hold the Buccaneers to an offensive stand still in overtime, but it was their ability to foul that superseded their defense.

Missing their final few attempts to beat the Buccaneers, the Leopards came up just shy of the win, ending 107-105.

Following the loss, the Leopards went on to take their first victory of the season, beating Yellowstone Christian College 86-69 on Saturday.

The Leopards will return against Westcliff at 2 p.m. on Saturday at the Frantz Athletic Court.

Volleyball falls to No. 5 Athenas in semifinal
Kingsmen top Leopards in defensive brawl