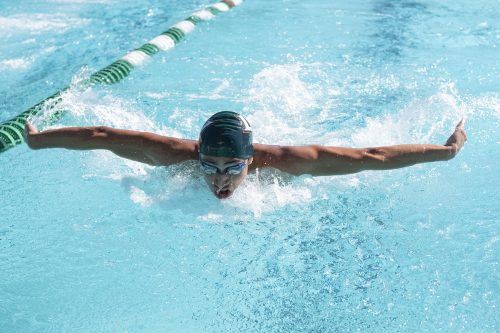 The men’s swimming team finished just barely ahead of Whittier, 97-96, but the women weren’t able to push past the Poets, losing 116-102 on Saturday.

The junior duo of Lorenzo De Leon and Brian McAteer locked in the victory for the men, dominating the men’s 200-yard individual medley placing first and second.

The women were led by La Verne native senior Jessica Argelander, making another big splash in her events. Argelander clocked in at 24.55 for her 50 free and 53.95 in her 100-yard freestyle, winning both.

“They have some fast girls and I think they helped us to swim faster and get some better times,” said Carli Willis.

Leopards freshman diver Kira Degelsmith flipped over the competition on the one-meter board, finishing with a score of 150.10 and placed first.

Coaches say that the team has been building off of each and every week trying to carry their momentum forward.

“We swam faster times this week than last week and winning last week by one gave the women confidence, which help them give the men confidence and so it was a really good team effort,” said head coach Pat Skehan.

Coming into this competition Skehan said she wanted to see if her athletes could fight through fatigue.

She said the level of effort the teams showed was exactly what needs to be carried through the season.

“Brian took a big step in both his individual medley and breast stroke,” said Skehan. “I thought that Trevor is constantly swimming well and is more confident in the distance swimming. And even though we lost that last relay we were able to win the breast stroke to push it to one.”

Both teams rallied behind their swimmers when it came time for the 200 breaststroke and the 4×200 freestyle relay. McAteer touched first in the breaststroke with a time of 2:17.07 that gave the men’s teams a lead going into the final race.

“We knew it was going to be close, we were biting our nails all the way through. We needed to swim fast and have effective relays,” said De Leon.

The Leopards fell just short of the Poets, touching in second with an unofficial time of 1:34.25. Although the Leopards lost the final relay McAteer’s win in the 200 breaststroke ended up making the difference.

The Leopards will compete at the Collegiate Winter Invite Dec. 6, where both teams are looking to better their times.

“We will be in fast suits for the Winter invite so we will be a little bit tapered coming into the meet,” said Willis.

The Leopards make their next appearance Dec. 6-8 at East Los Angeles College.