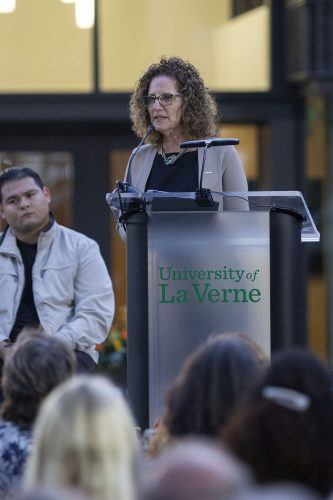 Members of the University community gathered on Nov. 14 for the dedication ceremony of the Ludwick Center for Spirituality, Cultural Understanding, and Community Engagement, which provides a space for students to engage spiritually and collaboratively.

Don Kendrick, the mayor of La Verne, said the Ludwick Center cultivates an important role not only on the University campus, but also for the entire La Verne community.

“There’s two kinds of people in this world: decent and indecent. [The Ludwick Center] makes a better world, if we can all be decent toward each other and our ideas,” Kendrick said.

The building is composed of two towers, which are joined together by an outdoor bridge with seating areas.

Just behind the structure, there are several outdoor meditation spaces among the courtyard, as well as a reflective pool.

Other features include a large sacred space, three classrooms, a group prayer and meditation room, a yoga and quiet room and places for students to collaborate and study.

University Chaplain Zandra Wagoner invited the audience to connect to any higher power or spiritual entity to say a prayer before the ribbon cutting.

“This center is a new light, a new illumination in the soul of the university,” Wagoner said. “Let us bless this center as a place of love where people can gain wisdom and cultural understanding.”

Wagoner said the Ludwick Center represents justice, unity, peace and harmony, where she says the campus community’s differences are its strength.

“[In the Ludwick Center] people are free to explore their place in the rhythm and dance of this university,” Wagoner said.

Inside the main entrance of the Center is a sculpture called “Shimmering Leaves – Perished Families” by Holocaust survivor and educator Gabriella Karin.

The moving sculpture, standing nine feet tall, depicts metallic leaves falling from the illuminated top of the piece. Karin says she used leaves to represent the 11 million lives lost in the Holocaust, because a falling leaf is no longer alive.

Roy Requena, senior finance major, said the Ludwick Center is a necessary addition to further improve the culture on campus.

“The Ludwick Center brings a much needed, progressive change on campus,” Requena said. “It creates an environment where students are able to grow within themselves by being who they are.”

The Ludwick Center is an interfaith gathering place for La Verne students, faculty, and friends to reflect, meditate, and engage in dialogue.

Requena said many students often are battling issues internally, and that battle is a process to overcome. He thinks this center will assist them in that process.