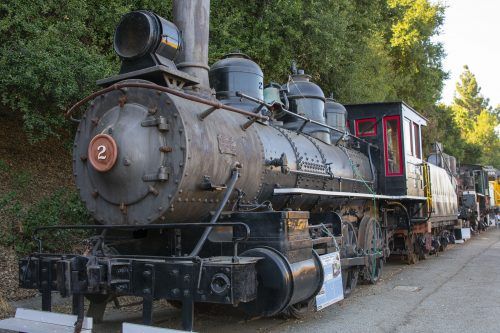 The Outer Harbor Terminal Railway Co. No. 2 engine was retired in 1955 and was once the oldest working steam locomotive in daily service in the U.S. It is on display along with more than a dozen other trains at the Rail Giants Train Museum at the Fairplex in Pomona. / photo by Maydeen Merino

The Rail Giants Train Museum is a display of historic and preserved locomotives at the Fairplex in Pomona.

When entering the exhibit, the public first witnesses the Santa Fe station from Arcadia that was built in 1887.

The Santa Fe station provides an example for guests of what it was like to be at a train station during that time.

Inside of the Santa Fe station is where guests are able to purchase souvenirs, view memorabilia and model locomotives.

Shelley Hunter is the retail sales manager of the museum and has been working at the exhibit since 2010.

“We have a lot of trains that are one of a kind, a lot of unique pieces that a lot of place don’t have,” Hunter said. “We try to keep everything in the best condition we can.”

The museum displays little known trains such as the United States Potash Co. No. 3, a turn-of-the-century narrow gauge locomotive originally built for a railroad in southern Arizona.

“It’s more for history purposes so you can see what used to exist back in the day,” said Carlo Lobos, Burbank resident.

Lobos said he and his friends visited the Rail Giants exhibit years ago to see the “Big Boy,” a Union Pacific train that was once the main attraction there for 51 years.

The “Big Boy,” Union Pacific 4014, has been taken to Wyoming for restoration. There has been rumors it will be returning for the 100th anniversary of the Los Angeles County Fair in 2022.

Another train that has been preserved is the Pullman Business Car that was built in 1923 and named Mountain City.

Atchison, Topeka and Santa Fe 3450 is a Hudson type locomotive 3450 built for Santa Fe in 1927 and designed for a high-speed passenger service.

In its final year of service, the train was featured in “Living It Up,” a 1954 comedy starring Dean Martin and Jerry Lewis.

Rosie Castillo from Irvine said she came because she was looking for something to do with her children for the weekend.

“We have never been to a museum like this. We really liked it but we were a bit concerned about whether my two older boys will like it but they actually really do,” Castillo said. “Trains were used so long ago so it’s nice to get the feel of how it used to be in the past.”

The museum is free and open to the public during the second weekend of every month.

“We are history. I remember a woman came in here and she said she was getting tired of carnival things and people trying to sell her stuff all of sudden she walks in here and she’s learning things,” volunteer Bob Krave said.