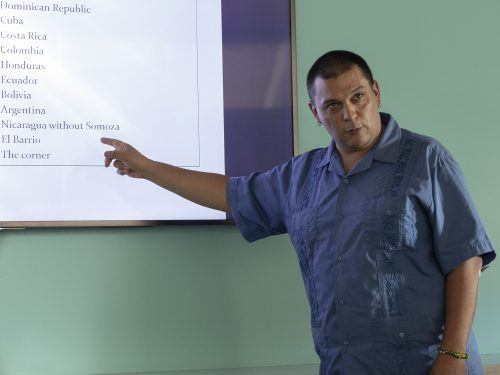 Andres Espinoza Agurto, assistant professor of music, discusses the impact salsa music has on developing the social and political identity in Latinx communities, Tuesday in the Executive Dining Room. He presented his findings after researching 158 different songs. / photo by Danielle De Luna

Andres Espinoza Agurto, assistant professor of music, discussed his analysis of the impact salsa music has on social and political identity within Latinx communities Tuesday in the Executive Dining Room.

Espinoza began his presentation titled, “Una Sola Casa: Salsa Consciente and the Poetics of the Meta-barrio,” with a personal anecdote on his own experience in migrating from his native country of Chile to the United States.

“America doesn’t help you define your culture or race,” Espinoza said. “I got here and thought ‘Am I white? Am I black? Am I a Latino?’ I just didn’t know.”

Espinoza told the audience of about 15 that these categories are common in the United States and Canada. Outside of these countries, being a “Latino” was not exactly a thing.

Espinoza said that all of the similarities he found in Latinx cultures were because of salsa music and a concept called salsa consciente.

By studying 158 songs, Espinoza said he found that salsa music advances the Latinx community culturally, racially, socially and politically when it comes to identity and aids in developing a cultural conscience.

Espinoza also introduced the concept of Latinidad, which he defined as the linkage of two or more Spanish groups in the U.S. through migration or other notions, such as poverty or discrimination.

Once these groups discover their similarities it transfers into stories, becoming a medium for speaking about social issues and building up the culture of the Latinx community overall, he said.

Espinoza explained how salsa music does that for the Latinx community.

He presented the translations and analysis for the salsa song “Plastico” by Ruben Blades. It is a song made specifically for Latinx people as it encourages them to not lose hope or faith in building a united Latino community in America.

Espinoza also spoke briefly of the political motifs presented in the music.

Espinoza is working on a book about the concept of salsa consciente.