By Layla Abbas, Veronyca Norica on November 22, 2019 in News 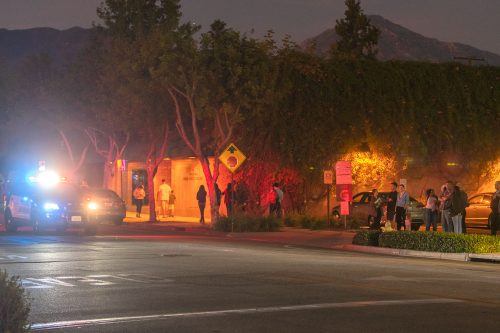 University of La Verne students gather around D Street and Arrow Highway to see the area where a student was hit by a car while jaywalking Monday evening. The student did not need to be taken to the hospital but was left with bumps and bruises. / photo by Veronyca Norcia

The La Verne Police Department, with the La Verne Fire Department, arrived on scene Monday evening after a report came in that a vehicle struck a pedestrian who was jaywalking on D Street, just north of Arrow Highway, near the access road into the parking structure.

The pedestrian had bumps and bruises and did not have to be transported to the hospital, said La Verne Police Officer Martin Weinreb.

“There are always issues over here, and the biggest issue, I hate to say it, are cell phones,” Weinreb said. “A lot of students are just walking across the street and not even looking. That is why it is called an accident, it is not intentional. When it gets dark outside it is hard to see sometimes.”

The vehicle was making a left on D Street when it made contact with a student who was crossing near the Art and Communication Building, toward the bookstore.

Abdulrahman Almohannadi, junior business administration major, saw the aftermath of the accident and threw his phone in the air before rushing to help.

“I went running over there and saw the girl laying on her side. She was not under the car but right next to the driver’s side,” Almohannadi said. “She needed help getting up and then the fire department helped her walk to the side by the bookstore.”

Almohannadi said he was able to reach for the girl’s cell phone that was underneath the car.

Wienreb said he understands why people may want to cross in the shortest distance possible, but the signs that are posted say “Do Not Cross, Use Crosswalk,” for this very reason.
“When I got here the fire department was already here and they were tending to the student that got hit by the car,” Weinreb said.

According to a 2018 report from the National Highway Traffic Safety Administration, 6,482 pedestrians died from traffic related incidences, which is the highest it has been since 1990.
Although this area is not a designated crosswalk, it produces lots of pedestrian traffic.

Weinreb said he recommends the University to implement a pressure sensitive crosswalk in this area where many students and faculty alike cross.

“It is pressure sensitive so when you get to the edge of the curb it feels your weight and sends a signal to the light and the light switches on,” Weinreb said.
“It gives drivers a heads up that ‘Hey there is something coming.’”