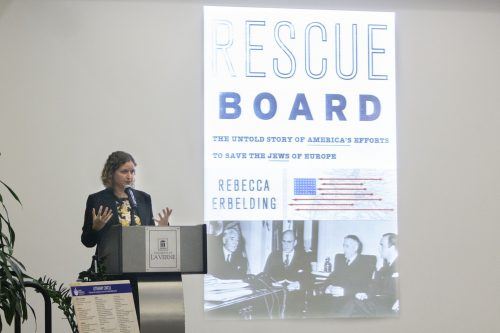 Rebecca Erbelding, historian at the William Levine Family Institute for Holocaust Education, spoke about her award-winning book, which told the untold stories of the U.S. support during World War II, Sunday at the ninth annual Kristallnacht Lecture in the Campus Center Ballroom.

Erbelding’s book, “Rescue Board: The Untold Story of America’s Efforts to Save the Jews of Europe,” is the first non-self-published book about who the War Refugee Board were and what they did, she said.

Erbelding said that when she tells people the name of her book, people believe that Americans knew everything and did nothing or they knew nothing until liberation and did nothing. Neither are true, she said.

Rosswell McClelland was an aid worker with the American Friends Service Committee, the Quakers, who had participated in feeding programs in Germany after it was devastated in World War I, Erbelding said.

She added that because Nazis had a positive impression of the Quakers because they remembered being fed with them, they were allowed to stay in Germany longer than other Americans.

In August 1942, McClelland saw the first wave of foreign deportations in Paris, where prisoners were taken to Auschwitz and killed upon arrival, Erbelding said.

A week before the deportations he met with Pierre Laval, a French politician, and asked Laval to cancel the deportations because “the Nazis plan to exterminate these people.” Laval laughed at McClelland because what he said was merely rumor.

Holocaust survivor Gabriella Karin, who is from Bratislava, Slovak Republic, and was only 8 years old when World War II started, also spoke at the lecture about her experience during the war and how it inspired her art.

“Before the war, we lived in a peaceful, democratic country very similar than we are living in today. In our wildest dreams, we could not have imagined what would happen, but it did,” Karin said.

Karin, who is a sculptor, created a piece called “We Remember Them,” which depicted dead leaves on the ground, each leaf inscribed with the names of family members she lost during the war.

“This is my family. Seventy-five people were killed in the Holocaust. I wanted to memorize them, I wanted not to forget them. And I used a leaf that is falling down from a tree, because this is not alive anymore,” Karin said.

After a trial in London involving a Holocaust denier, Karin said she wanted to do something visual.

“I know there is a lot of written word, but maybe visually people will understand it more,” Karin said.

Karin recreated a grander version of her first piece, which will be a permanent display in the Ludwick Center to represent the 6 million people who lost their lives during the Holocaust.

The piece, which is called “Shimmering Leaves – Perished Families,” is a nine foot tall structure that recreates the image of leaves falling from a tree.

Erbelding said McClelland was not the only person who was interested in helping during the Holocaust.

In response, a meeting was called under the auspices of the Los Angeles Citizens Committee for Justice to Jews in Germany on March 29, 1933, which was attended by 3,000 people with more unable to enter the building.

The gathering sent a letter to the U.S. State Department saying, “We concur and unite in unyielding condemnation of these practices and do most emphatically appeal to the government to continue its good auspices with the German government that these reprehensible methods may be abandoned and that all Jews of Germany may be restored to complete equality and justice in every respect.” The committee lasted 12 years.

“But, like with many foreign news stories, it slips off the front pages after the spring of 1933. And so Americans stop paying attention,” Erbelding said. “They pay attention again with Kristallnacht.”

Americans were so interested in the events that happened, that it displaced news of the midterm elections in 1938, Erbelding said.

“The problem is we are a democracy. Most Americans are not interested in welcoming more refugees or immigrants at this time,” Erbelding said.

Most Americans did not want Congress to introduce new bills relating to immigration, Erbelding said.

“For Americans, it takes a long time for them to believe that this is happening. It seems too impossible to be true and too illogical,” Erbelding said. “There was also a fear that this could just be a rumor. When you are trying to get people rallied for war, you talk about the murder of woman and children.”

Erbelding said a letter about the Nazi plan of the extermination of Jewish people addressed to Stephen Wise, a rabbi in the U.S., was blocked by the State Department, saying that it was just a war rumor.

Despite the State Department’s attempt to keep the information out of public knowledge, it got out.

“In 1943, there’s enough public pressure that there are marches, there are rallies, there’s a stage show that tours the country, there’s an orthodoxed rabbi’s march that’s in the west capital in 1943. There is pressure on the U.S. government to do something about this,” Erbelding said.

A group of treasury department lawyers said they could send small amounts of humanitarian aid, while the State Department did not want to send resources.

“The State Department figured that if the activists don’t know what’s going on, they won’t pressure the U.S. government to do anything about it,” Erbelding said.

Erbelding said the treasury department then wrote a memo, using the evidence from the State Department, saying that the slaughter of the Jewish people is one of the greatest crimes in history and will continue unless the U.S. does something about it.

It ended by saying that “this government will have to share for all time responsibility for this extermination.”

The treasury department was able to convince the president to issue an executive order that established the War Refugee Board, which was tasked with relief and rescue, she said.

“So for the first time, the U.S. has a policy about the Holocaust and a policy about rescue and relief. By the time the War Refugee Board shuts down 21 months later, they have saved tens of thousands of lives,” Erbelding said.

University President Devorah Lieberman said that the Erbelding’s lecture and book showed the importance of learning about history.

“The speaker opened my eyes to the advocacy that was in the U.S. and the U.S. government that I never knew about,” Lieberman said.

University Chaplain Zandra Wagoner said that the Karin’s sculpture will be on display in the Ludwick Center lobby.

“It will always call out our humanity, and call us toward our best self, because this was our worst self,” said University Chaplin Zandra Wagoner.