The win is the first victory for the team since Oct. 2, ending a five-game losing streak. The Leopards came into this match following a 3-0 loss at home to Chapman on Senior Night on Saturday.

Head coach Lauryn Pehanich said this was the first time in a while the team played unified.

“We talked a lot this week about everything we do we do together,” Pehanich said. “I’m really happy with the mindset of them, the attitude, and just overall soccer.”

The Leopards created good attacking scenarios early, but due to the tough defense that Redlands provided, they were only able to manage one shot on goal for most of the first half.

The Leopard forwards made several good runs, but the Redlands back line was able to run stride for stride and disrupt every attack.

The Leopards were finally able to shift the momentum and create a good enough attack in the 37th minute when senior midfielder Alina Cobian to put one in the back of the net on an impressive strike from the right side of the field.

The ball was shot inside from the right side of the field and bounced around a bit before Cobian was able to volley the shot into the net. This goal would be the final goal for Cobian at Ortmayer Stadium.

“I was working for it, I was trying to get the win for my team and do what I could,” Cobian said. “It was a team effort and I’m just proud of everybody.”

Despite the cold weather, the Leopards were able to stay hot and continue with their pressure throughout the second half taking several good shot attempts from close.

Midway through the second half, Cobian missed a golden opportunity in front of the goal, as the ball soared over the crossbar and out of play.

Redlands was just as aggressive, moving the ball into striking position with every possession. The Redlands attack kept freshman goalkeeper Samantha Corney busy in the second half, but fortunately for the Leopards, she wouldn’t allow the Bulldogs to even the score.

“I had a lot of help from the defense, there were a lot of through balls that I may have not gotten.” Corney said. “A lot of it came with communication because it was shifting with the defense trying to get coverage.

A lot of credit also goes to the Leopards back line, they were able to stop nearly every attack and prevented the Bulldogs from equalizing.

“It’s all about keeping your composure,” said sophomore defender Kaylee DeMarchi. “I think we really did a good job coming together.”

Things got physical late in the second half as players were constantly dropping each other, resulting in five yellow cards issued between the two squads.

Leopards freshman defender Danielle Bennett missed back to back opportunities inside the box late in the second half, any one of those opportunities could have put the game out of reach.

The Leopards finish off their 2019 campaign with a match at Occidental at 7 p.m. Saturday. 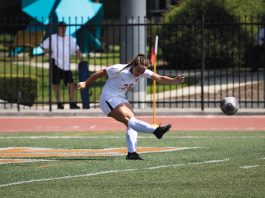