By Campus Times Editorial Board, Danielle De Luna on December 6, 2019 in Editorials, Opinions 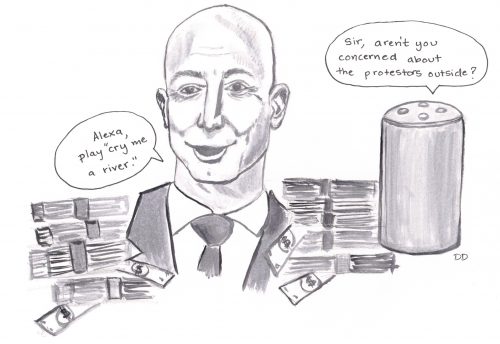 You can almost purchase anything on Amazon. It is as simple as browsing through thousands of items, finding the right one and adding it to your cart. It will appear on your front doorstep in a matter of a few short days, or in some cases overnight. The catch? Those who package and ship your item are treated not like human beings, but rather like robots who are expected to perform as such.

Protestors gathered outside of Amazon’s CEO Jeff Bezos $80 million penthouse in New York City Monday as a desperate cry to bring attention to the detrimental warehouse conditions and negative impact Amazon has on the environment and local communities.

In the aftermath of annual shopping spree events like Cyber Monday, the brutal and unsafe working conditions that Amazon workers are subjected to is again highlighted. Amazon has continued to receive criticism for the way they treat their workers and yet no action is being taken to protect these workers from being treated like they are robots.

Bezos, who founded what is now the world’s biggest online retailer, is worth $111 billion. Amazon reported revenue of $233 billion in 2018 and is worth $800 billion, according to Bloomberg.

Yet, the workers are quickly discarded if they fail to meet their quota for shipping packages or fall short of the productivity performance expectations.

This should put people who use Amazon on high alert. The people who package your items are being treated very poorly. If the workers do not meet their quota of fulfilling job orders for the day, they can be subjected to constant disciplinary write-ups and scrutiny from their majors.

A 2019 report by the Atlantic found the rate of serious injuries for 110 fulfillment centers nationwide was more than double the national average for the warehousing industry.

The same report highlighted the unjust and brutal working conditions Amazon workers experience. When there was a gas leak in an Eastvale Amazon warehouse, managers refused to slow down and several workers who were dizzy and vomiting were told they’d have to use personal time off if they wanted to leave, according to the report

Bezos, who is one of the richest people on this Earth, should care more for the working conditions, physical and mental health of his employees.

As we enter one of the biggest shopping months of the year, keep in mind the struggles each Amazon worker experiences when you place an order through Amazon – although its convenient factor is appealing, it is not worth the emotional and physical damage it is causing to Amazon workers.