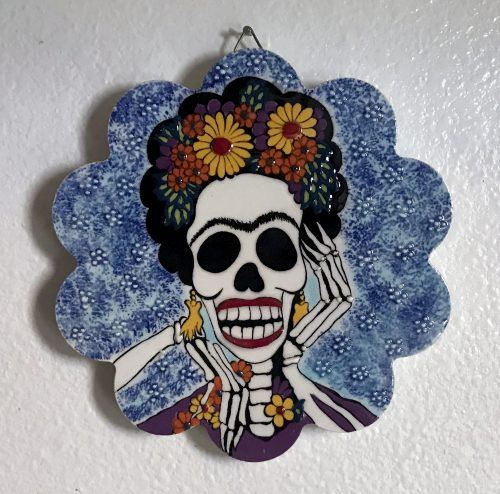 This blue tile depicting a Day of the Dead rendition of Frida Kahlo, purchased at an Olvera Street kiosk, is now displayed in my kitchen. / photo by Emily J. Sullivan

I boarded the Metrolink train at the Claremont Metrolink Station to Los Angeles on a Friday afternoon, ready for an adventure to Olvera Street.

I watched different cities appeared and disappeared from my window while making the trek to Los Angeles. Vibrantly painted wall murals, clothing hang-drying from backyard lines and signage representing various cultures zipped past. I explored parts of California I might never have got to otherwise, all while gazing from my seat.

Built in the 1930s, Union Station opened with an extravagant three-day celebration attended by a half million Los Angeles residents.

Visiting the station today is like passing through a cultural time portal.

The architectural style known as Mission Moderne, is a blend of Spanish Colonial, Mission Revival and Art Deco.

The station is visually so stunning that films including “Blade Runner,” “Pearl Harbor,” “The Dark Knight Rises” and numerous others have used it as a filming location.

When my train arrived at Union Station, I walked down from the platform and made my way toward the entrance through massive halls filled with bustling Angelenos. The front of the station faces Alameda St., when I crossed I found myself on the east side of Downtown Los Angeles and facing the alley-way like entrance to Olvera Street.

Los Angeles used to be part of Mexico, from 1821-1848, and in 1850 California became part of the United States. Olvera Street is the historic district in Downtown L.A. and a part of the El Pueblo de Los Angeles Historic Monument. It is home to many of the Plaza’s historic buildings and some of Los Angeles’ oldest monuments like the Avila Adobe built in 1818 and the Sepulveda House built in 1887.

After the war, immigration to Los Angeles surged and by 1930 a campaign to turn the area into a Mexican marketplace came to fruition when on Easter Day, Paseo de Los Angeles also known as Olvera Street opened advertised as “A Mexican Street of Yesterday in a City of Today.”

Anthony Bourdain visited Olvera Street in “Parts Unknown” because in addition to the architectural history, the streets are lined with restaurants that serve some of the most authentic Mexican cuisine this side of the border.

Cielito Lindo has been serving its signature and now world-renowned taquitos since 1934.

If you visit the restaurant on a weekend, you can expect a line that extends around the corner for the taquitos that come drenched in an avocado, chile guero, tomatillo and cilantro sauce.

Because I fancied a meal coupled with margaritas and an outdoor patio table, I moseyed into El Paseo Inn, one of the oldest bars in Los Angeles.

I strategically picked a table near a four-piece mariachi band, donning guitars and sombreros who sang and strummed “La Bamba” and other Mexican classics.

I sipped on the Patron Jalapeno specialty margarita while taking in the scenery of the old buildings adorned with brightly colored Mexican flags.

The savory dish had buttery seafood flavors lingering on my taste buds after each bite. It was the best Mexican food experience of my life.

On my way out of Olvera Street and back to Union Station I purchased a blue, wall-mounting tile with a Day of the Dead rendition of Frida Kahlo pictured on the front.

When I returned home from my adventure west to Olvera Street, I hung the tile in my kitchen to remind myself to explore not just different places but different cuisines when I’m cooking at home.