By Ariel Torres, Savannah Dingman on December 6, 2019 in News 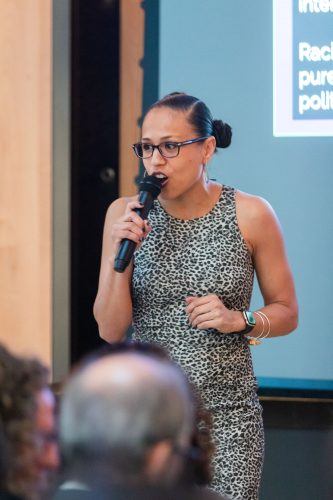 Gina Garcia, an expert on Hispanic Serving Institutions, discusses HSIs and opportunities for Colleges and Universities in the Ludwick Center Sacred Space on Nov. 21. HSIs are colleges or universities that enroll at least 25% Latinx undergraduate students. / photo by Ariel Torres

An HSI is defined by the federal government as any non-profit college or university that enrolls at least 25% Latinx students. Garcia says HSIs are enrollment driven institutions that lack a historic, culturally enhancing experience.

Garcia is an author, scholar and professor at the University of Pittsburgh. Throughout her lecture, Garcia highlighted topics from her book “Becoming Hispanic-Serving Institutions: Opportunities for Colleges and Universities.”

The theme of Garcia’s lecture recognized that people’s identities are difficult but important work. She warns against a color-blind or color-neutral perspective.

“Race may not be ‘real,’ but it does have real implications. We’ve got to be ready to have uncomfortable conversations about race,” Garcia said. “(A college or university) would not be an HSI if it weren’t for the race of its students.”

Christian Bracho, assistant professor and co-director for the Center for Educational Equity and Intercultural Research, said he is happy to see the University embracing learning about its HSI identity and figuring out how to do a better job serving its students.

“(Garcia) is committed to disrupting the status quo of post-secondary education by bringing attention to ways that higher education has historically been committed to whiteness and reinforcing American standards around that,” Bracha said.

“Our structures and spaces have not adapted to that cultural change,” Garcia said. “The people are here, I see you, but you haven’t necessarily adapted structurally. This idea is about transforming.”

An early narrative of HSIs is that they simply were not good. Historically, Garcia also points out that racially minoritized institutions are seen as inferior to predominately white institutions.

Garcia said the problem begins from the way an institution’s success is measured. This measurement is based on graduation rates, which Garcia explains as a white normative narrative.

“What if graduation was a white-normative value,” Garcia said. “What if HSIs were more than just graduation rates? What if they started to be spaces of justice, equity and empowerment, and then graduation came along with that?”

“It’s helpful to figure out ways to incorporate how to determine a student’s intelligence past just test scores,” Santa Cruz said. “Being able to relate education to social justice and societal expectations is complex but important.”

With the current system in place, Garcia said money is granted based on a deficit narrative, rather than an asset-based approach.

Because of the complexities, Garcia said becoming an HSI is neither a quick nor easy process. Additionally, there is not one single approach that fits the many different shapes and sizes of different HSIs. Garcia compares HSIs to an array of fruit; what works for one school might not be effective for another. She recommends starting conversations on the specific campus about what works and what doesn’t.

Garcia emphasizes a ‘come as you are’ approach and the importance of valuing students the way they show up. Garcia welcomes language barriers and cultural differences in the classroom.

“What you know is valued, it’s my job as a teacher to figure it out,” Garcia said.

Alex Arellano, a graduate student studying education, currently substitutes in the same, diverse community he grew up in.

“There’s a lot of Black and Latinx kids, like myself, in my community. [Garcia’s lecture] inspired me to be more comfortable with relating to students on a more personal level and reminding them ‘I am like you, I was you,’” Arellano said.

Garcia’s ultimate goal is to get her book in the hands of policy makers.