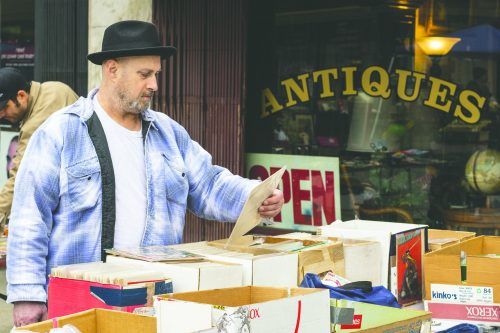 David Noreg browses through a collection of comic books at the Downtown Pomona Collector’s Street Faire on Sunday. The faire is a monthly event that allows people to shop for antique items like classic Barbies and pocket radios. / photo by Melody Blazauskas

Treasure hunters eager to find deals on the antiques flooded the sidewalk at the Downtown Pomona Collector’s Street Faire on Sunday.

The street, famously known as Antique Row, was the go-to place for all antique shops and thrift stores, but as time passed and the buildings started being renovated and changed to restaurants, the street fair was created for antique vendors to continue their practices, said Steven Nash, a radio repairman.

Nash, more commonly known as “Nash the Radio Man,” collects and restores antique radios dating as far back as the 1960s.

Nash had a collection of about 30 pocket radios on the table, and told a story of how he and his peers used to use these radios to listen to Dodger games and news reports in the middle of class, as they only had one earphone jack and made it less likely to be caught in the act.

Mary Ellis, Pomona resident, collects Barbie dolls dating back to about 1965. Her booth showcased all types of Barbies including the Japanese Barbie, the French Barbie, and even the original wedding Barbie in its original packaging.

Ellis gave brief descriptions of each doll and said she has been a Barbie doll collector since 1959.

“The French Barbie is my favorite because I love her clothes and her hair. I wanted to be like her when I was little,” Ellis said.

Many of the Barbies were marked down from their original prices. They are valuable collector’s items and go for about $200 per doll.

Ellis mentioned her goal to get rid of them as they won’t do anything but collect dust in her home.

A popular collection were the Hot Wheels and Matchbox cars. Four different booths had these small collectible cars, but one stood out as it had three tables with collapsible shelves stacked about four levels up with nothing but cars.

Shoppers and their children surrounded the tables and engaged in conversation with each other as they moved from car to car.

Joe Johnson, the owner of the car collection, talked about the cars and how they have meant a lot to him since he became a collector in 1986.

“My grandmother actually started this collection back in the ‘60s,” Johnson said, “When she passed away I stopped collecting for awhile, and then I found the urge to do it again and the collection just continued to grow.”

Johnson said he was excited about collecting cars with perfect detail and even has an exact replica of his own Cadillac.

Three blocks of antique items, such as Nick Magana’s brooch collection, was a wonderland for collectors near and far.

The Collector’s Street Faire occurs on the last Saturday of every month. The next one will be 8 a.m. to 3 p.m. Jan. 28 at the Antique Row in downtown Pomona.