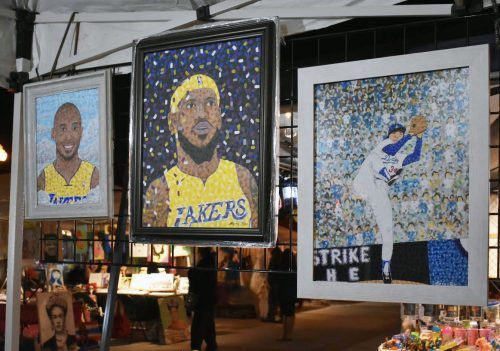 Martin Ross creates paintings using an original technique he coined as the “Martin Ross Technique,” where brush strokes are made to resemble confetti. His paintings take inspiration from Los Angeles culture, such as Los Angeles sports teams and star athletes. Various artists are featured at the Pomona Art Walk monthly. / photo by Raylene Lopez

Booths and music filled the Shaun Diamond Plaza during the monthly Pomona Art Walk on Saturday.

Various artists displayed their work for the community to view and shop through, with some pieces created so as to convey a larger message and others as a personal outlet.

Trinity Suarez, co-owner of art company S Arte, said she wants to spread the message of body positivity through her artwork. She had her painting of a human body on display.

“People are working on loving themselves,” Suarez said.

She added that she hopes she can aid others on their journey toward learning to love themselves through her art.

Nick Lewis, owner of art company NickLewisArt, said that he uses his art as an outlet from everyday stress.

“I work a normal 9-to-5 as well and art’s something that I’m able to come home and put my thoughts and feelings into… it’s kind of everything,” Lewis said.

Lewis said he became inspired by positive feedback, and hopes to turn his hobby into a full time job at some point.

Annalise Gomez, owner of art company Art-by-Nonz, said she never saw herself as an artist until her high school art teacher and friends encouraged her to take her work beyond the classroom.

“It feels good to be around other artists because you look at their stuff and you don’t want to be like them but you want to be as good as them and it pushes you,” Gomez said.

Martin Ross, owner of art company Paintings by Martin Ross, brought his own original technique to Pomona that he has titled “The Martin Ross Technique.”

The technique consists of multi-colored rectangular brush strokes that overlap. Once the painting is complete, it appears as though the objects within it are made of falling confetti because of the various shapes and colors of the brush strokes.

“I still paint conventional style but just to be unique I created this technique,” Ross said.

Ross explained that he takes inspiration from the media and the world around him. Many of his pieces feature Los Angeles sports icons like Kobe Bryant, LeBron James and Fernando Valenzuela, as well as famous sport stadiums like the Angels Stadium in Anaheim.

This event has become a home to several artists such as Krys Mendoza, owner of art company As Above So Below Arts and Crafts, who was raised locally in Pomona but now lives in Fontana.

Mendoza was apprehensive at first about putting her artwork on display, but after joining the walk she gained more confidence from the visitors who purchase her work and request for more.

“It allowed me to open my wings. It is true what they say… as long as you love what you do it’s never a job, I have the privilege of selling my art and calling it my work,” Mendoza said.

Inspired by horror and pop culture, Mendoza’s work featured gothic elements. She described it as both colorful and dark.

Mendoza’s pieces feature stickers with popular horror-genre characters like the Joker, Jack Skellington and Morticia Addams from “The Addams Family.”

The stickers tend to come in the form of a portrait with the characters in the center.

The portrait of Freddy Krueger held a murderous gleam, with burn marks framing his eyes and electric white paint making them all the more noticeable.

The Pomona Art Walk takes place from 6 p.m. to 9 p.m. on the second Saturday of every month in the Shaun Diamond Plaza on Second Street.

Admission is free. The next art walk will be March 14.

Raylene Lopez can be reached at raylene.lopez@laverne.edu.