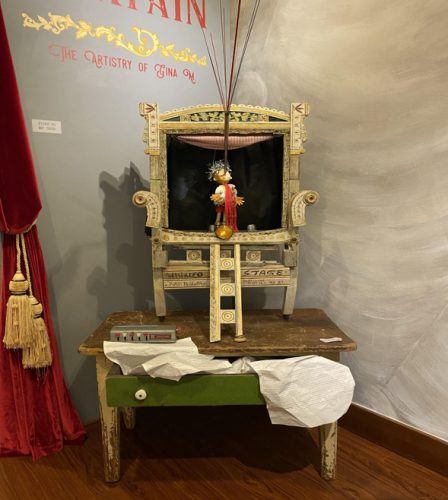 A piece called “Mawwiage” by Gina M. on display at the Cal Poly Pomona Huntley Gallery with a visual representation of Pinnochio in place of President Donald Trump, depicting him as liar. / photo by Valerie Valadez

As a child, artist Gina M. worked at a puppet theater, where she coordinated events and made puppets for other kids.

That experience has informed her new exhibit, “Through the Toy Shop and Behind the Curtain,” at Cal Poly Pomona’s Huntley Gallery, which features a collection of toys, some whimsical and some politically charged.

Near the entrance to the gallery are numerous clay toys, and stuffed animals. Farther in, the exhibit features theater curtains and puppets on strings.

Gina M. was a lonely child which influenced her art, according to the exhibition program. The toys seemed abandoned because they were torn and had missing pieces.

In the back of the gallery there was a Pinocchio on a stand with a little American flag on his chest. On the bottom of the stand there were five letters written – POTUS.

Alongside the Pinocchio, there is a baby in a glass bottle with a skull-shaped rocket. On the bottom of that piece, there is a statement that says “In a droam.”

“You can clearly see that Gina M. uses her art to make political statements, to demonstrate her point of view in politics as well,” said Emily Aguirre, sophomore psychology major at Cal Poly Pomona.

The toys made out of clay were so realistic they seemed as if they were about to come to life.

One piece was located in the center of the gallery that had a carriage and within it a skull on one side and a baby doll on the other side, separated by a black curtain.

“When people are passionate about something, they can do things in a very subtle and humorous way,” said Michele Cairella-Fillmore, gallery curator.

The gallery is inside the Cal Poly library, making students the largest audience. The big stand with crystals dangling in the entrance may be what attracted people to the exhibit.

“The social world impacts the individual to inspire their artwork,” she said. “Gina M. probably did not have many social connections and the only way of her connecting with the world was through her art.”

Most of the toys seemed to be aging and living in sadness because they had droopy eyes, skull figures, and detached heads. The entire exhibit is made up of worn down toys that are damaged and put back together.

“She brings up issues about childhood trauma and painful memories that is for anyone and everyone of any age, it is her power of taking things from everyday life and transforming it into art,” Cairella-Fillmore said.

“Through the Toy Shop and Behind the Curtain” runs through May 14.

Huntley Gallery is open from noon to 4 p.m. Saturday though Tuesday and from 4 p.m. to 8 p.m. Wednesday and Thursday.

Valerie Valadez can be reached at valerie.valadez@laverne.edu.