By Campus Times Editorial Board, Danielle De Luna on February 21, 2020 in Editorials, Opinions 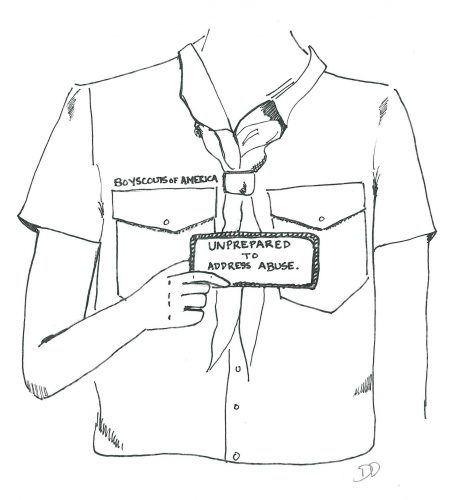 Amid the hundreds of sexual abuse lawsuits brought against them in the past few years, the Boy Scouts of America filed for federal bankruptcy on Tuesday.

The filing will allow the Boy Scouts to continue operation as it reevaluates its assets in order to pay off potential victims.

The youth organization, which has 2.2 million members in addition to over 800 thousand volunteers, has been a hallmark of American life that transcends generations and it is sad to see this once cherished organization crumble before our eyes.

From 1944 to 2016, the BSA found that nearly eight thousand of its former leaders were involved in sexual abuse scandals, identifying at least 12 thousand alleged victims.

It is terrible that an organization built on family values was hiding a monster in its shadow that left countless children scarred for life.

However, BSA took the scandal head on, giving their condolences to any victims – urging them to speak out if they have not already. As one can imagine, the flood of lawsuits eventually lead to its bankruptcy.

In 2018, the Scouts’ tax filing revealed a total revenue of $285 million, with the organization’s significant properties valued at $1.4 billion.

But because the claims have a deadline, it may hurt victims that are not ready to come forward.

The organization has also made it clear that its local councils have not filed for bankruptcy and are legally and financially independent.

In the bankruptcy petition, the organization reported between $1-10 billion in assets with reported liabilities listed between $500 million and $1 billion, but that latter figure will only continue to grow.

BSA’s youth membership has dropped dramatically over the past decade with over a 26% drop. This paired with the loss of a key partner in the form of the Church of Jesus Christ of Latter-day Saints has left the Scouts struggling to maintain relevancy.

This has lead some to question BSA’s reasons for accepting girls into the program, speculating that it is simply an attempt to boost its dwindling enrollment numbers.

The national chairman of the Boy Scouts of America, Jim Turley, wrote in an open letter that the organization entered bankruptcy in order for their victims to be properly compensated.

“The BSA cannot undo what happened to you, but we are committed to supporting you and to doing everything in our power to prevent it from happening to others,” Turley wrote.

In addition, the BSA’s new president and CEO, Roger Mosby, announced a partnership last week with 1in6, an organization specializing in male sexual abuse survivors.

While the Scouts are taking proper accountability for the scandals, the damage has already been done and it is a travesty that this even happened in the first place.