By Sheridan Lee on February 21, 2020 in Feature Slider, News 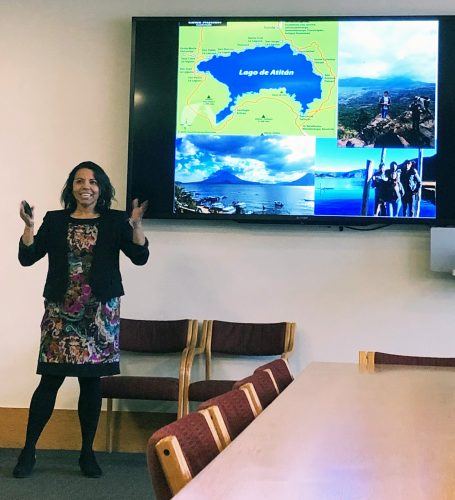 Heidy Contreras, associate professor of biology, presented results from her Science and Community program that immersed students in Guatemalan culture, Feb. 11 in the Howell Board Room. / photo by Sheridan Lee

Associate Professor of Biology Heidy Contreras discussed “Science Without Borders,” Feb. 11 in the Howell Board Room.

The lecture focused on her project for which she took students to Guatemala, to not only work on environmental research but to give back and immerse themselves in the culture.

For the class, Science and Community, she took four students to Guatemala in January to study and give back to the community, Contreras said.

“We’re trying to develop this program that allows our students very quickly, in the very first year they come on campus, to get involved in this project, get them doing research,” Contreras said. “We think it will help get students engaged in science.”

Before the trip, the students were educated on Fair Trade policies, ethics for global learning and emergency preparedness, she said.

During their three weeks in Guatemala, students studied how humidity affects organisms, such as a moths, among other things.

Contreras was born in Guatemala and moved to the U.S. as a child. She discussed the history of the Guatemala, the civil war and the effects it still has on their culture.

After the civil war, 1960-1996, most of their money went toward Guatemala’s military, with little going toward education and human services.

Contreras discussed the activities during their trip, during which they visited Guatemala City, Panajachel, Antigua Guatemala and Cobán.

The students also participated in activities such as spelunking, hiking and learning about the importance of coffee as it is an important staple of the Guatemalan culture.

Students were also able to experience the perspective of a farmer by processing coffee and understanding how fungus threatens its growth.

In addition, they visited historical and religious sites while in Guatemala.

The blooms are harmful as they release toxins, use up all the oxygen in the water, and result in a decline in the fish population. It has been proposed by the organization, Amigos del lago de Atitlan, to suck the water out and have it be sent to be cleaned, then return it, which would cost roughly $90 million.

Students in the class looked at vertebrates of Lake Atitlan, collecting samples and observing them with microscopes while sharing the results with others.

The students focused on water quality. They also taught Guatemalans the importance of the lake, how to check water quality using the donated kits they brought and how to use the microscopes.

To improve the program, Contreras has applied for a Hispanic Serving Institution mini grant among other grants. Her goal is to try and develop a program for students to get involved and start researching and to help provide services for Guatemala, and to focus on Hyles Lineata and the effect of ambient humidity.

“Being a biology major and wanting to be a doctor, science without borders interests me, as well as the program,” said Josephine Roberts, junior biology major.

“Fair Trade education stood out to me, not only are you learning from that country, but you’re teaching them,” Bailey Pettey, freshman business administration major, said.

Sheridan Lee can be reached at sheridan.grenda@laverne.edu.