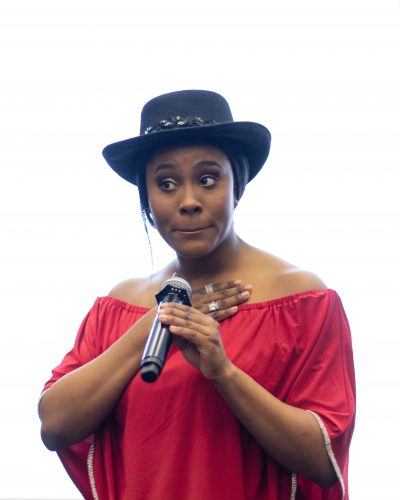 Denea Joseph, an undocumented black woman, speaks on the double standards and the attitude given to immigrants in the U.S. on Monday in the Campus Center Ballroom. / photo by Danielle De Luna

Denea Joseph, an undocumented black woman, shared her experiences living in the U.S. as a DACA recipient on Monday in the Campus Center Ballroom.

Joseph used this lecture as a way to address and acknowledge the plights of undocumented immigrants and the importance of solidarity and unity within the community.

Although immigrants tend to have similar experiences, much of the time certain groups are seen as lesser than others depending on their ethnic background, Joseph explained.

There is a large diverse population within the immigrant community, and it is not just one type of ethnic community that qualifies for DACA, she added.

When rapper 21 Savage was detained by ICE, a wave of media and online attention followed. Joseph questioned why that same level of energy was not brought to the table for every other immigrant facing the same issue.

“This is my home, but when I studied abroad, I never felt more safe. On the Parliament building in Barcelona, there was a big sign that read ‘Refugees Welcome,’” Joseph said.

There is no such thing as an illegal human being, Joseph said.

Everyone can be an active ally to the immigrant community, but that must include educating friends, family members and peers in the process, she added.

Another way to provide allyship is by voting on immigrant issues through elections. When it comes to voting, there are lives on the line and 11.5 million DACA recipients can potentially lose their status, Joseph said.

“What really stood out to me was when she talked about unity and solidarity within the immigrant community even though they are from diverse backgrounds,” said sophomore Spanish and French major Jesús Ramirez.

“I had a certain stereotype of the ethnicity of DACA holders, but I am glad I got a better understanding and was able to throw away the stereotype,” said sophomore international business major Jazmyne Davis.