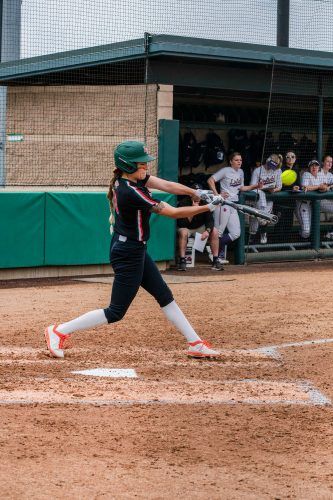 Leopards senior shortstop Ashley Soto takes a swing against the No. 11 ranked Linfield Wildcats. Despite winning six games straight and sporting an undefeated record, the Leopards met their match with the Wildcats, losing both games to Linfield, 6-3 and 6-2. / photo by Rachel Kendrick

The Leopards softball team lost to Linfield in a double header on Sunday, breaking their undefeated record.

Despite the Leopards having a hold of the Wildcats in the first game, they eventually fell short to the No. 11 team in the country, losing 6-3 and 6-2.

Linfield scored first in the top of the second inning with a home run and an RBI.

The Leopards soon retaliated in the bottom of the third with a home run off the first pitch by senior utility player Katheryn Navarro, scoring their first run.

The score maintained its position at 2-1 in favor of the Wildcats, until senior third baseman Justice Borden stepped up to the plate.

At the bottom of the fifth with two outs, a runner on second and third, as well as a full count, the odds were stacked against Borden.

But it was not enough to intimidate the returner as she stayed with the pitcher by hitting three foul balls, which led to her deep base hit, knocking in the runners on second and third and putting the Leopards up 3-2.

“I was really just pissed that Linfield was trying to get off the field when I was up to bat,” Borden said. “I wanted to prove to them like ‘stay out on the field, it’s not over yet.’ So I told myself…you need to get on no matter what.”

Unfortunately the lead only lasted until the top of the seventh inning when the Leopards missed a potential third out catch which allowed the Wildcats to take advantage, scoring three runs and sealing the final score at 6-3.

Despite the slight comeback, the Leopards would plateau at two points, making the final score 6-2, Wildcats. 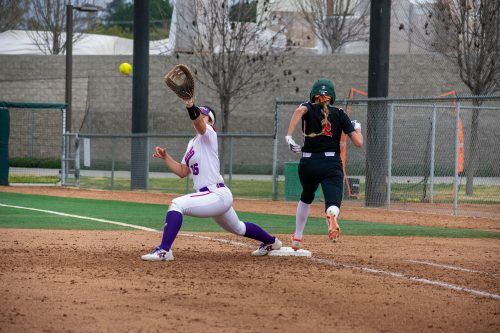 Ashley Soto was called out on this close play at first base. / photo by Rachel Kendrick

Head coach Dennis Blas said that the disconnect was a result of the team’s overall mentality.

“We gotta execute and we gotta have more mental focus cause we weren’t really mentally focused,” Blas said. “We did a lot of things that we normally don’t do.”

Junior middle infielder Niyah Brown said that the team needs to work on execution in order to better themselves for the upcoming conference season.

“We had multiple people in scoring position and I think that if we were able to score those people, it’d be a much closer game,” Brown said.

Freshman catcher Natalia Aguilera said she hopes the team can let their first loss go in order to move on to accomplish their overall goal.

“We just have to keep pushing cause I know we have a lot of potential to win conference so just keep working with that and learn from this mistake,” Aguilera said.

The Leopards, however, did have more strikeouts on the whole day than Linfield.

While Linfield managed to have five strikeouts, La Verne had seven.

Junior pitcher Jiana Rojo contributed with four strikeouts for the Leopards and Navarro with two.

One of the strikeouts were put up by freshman pitcher Rachel Rubio who recently returned to the field from injury.

“Our strengths are pitching,” Blas said. “You know, our pitching’s the best. Rachel Rubio is coming back from an injury so she’ll be ready to go for our weekend coming up.”

Rubio contributed and said that while the team needs to work on executing, they excel at picking each other up no matter the score.

“We’ve all been working really hard….My goal is to stay grounded and just get right to work and not get behind,” Rubio said.

Blas added that the team’s goal is to win the Southern California Intercollegiate Athletic Conference this season.

The Leopards start SCIAC play at home against Redlands at 3 p.m. Friday.

Noelle Blumel can be reached at noelle.blumel@laverne.edu.