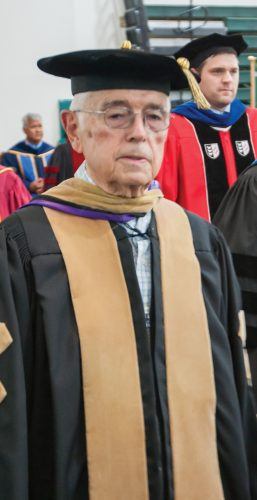 Family, friends and colleagues of the late John “Jack” McElwee, professor of business administration emeritus, gathered for a public celebration of life on Feb. 4 in the Ludwick Center’s Sacred Space.

Joy Obrock McElwee, Dr. McElwee’s wife, said she met her husband in the summer of 1949 and married a year later in the Church of the Brethren in Yellow Creek, Pennsylvania.

“Jack was my very best friend in all the world, until I had to share him with the University of La Verne,” she said.

They would have celebrated their 70th wedding anniversary in April.

Joy recalled the way she would smell dinner cooking every day when Dr. McElwee retired from working at General Dynamics, claiming that he was an excellent cook.

“I thought, ‘This is great,’ then he became immersed in ULV and campus life, developing and teaching courses, counseling students, serving on committees, being a founder of the International Institute and always being available for the reach program,” she said. “Well, I had to go back to cooking dinner.”

Dr. McElwee was completely absorbed by the University and loved every part of it, Joy added.

“I want to say thank you to the University for fulfilling his dream of being a college professor,” she said.

Dan Ablett, alumnus and former student of Dr. McElwee, said Dr. McElwee helped him fully understand concepts in class and described the experience as though someone were pulling back the curtains blocking the view of something important.

“He drew us in with passion and humor that was always delivered with earnest self-deprecation, indicative of a person who knows that he has humble roots, and had a rapier-sharp wit to remind you of the world class intellect that stood behind it,” Ablett said.

Ablett described Dr. McElwee’s tests as legendary and recalled a difficult multiple choice question on a test with the option to answer “I have no idea.” Ablett said that success on one of those exams was hard to earn, but satisfying when achieved.

What was even more satisfying was Dr. McElwee’s love and devotion he had for his students, faculty and the University.

“Our successes were his successes. Our failures were his. It wasn’t an act – it was the real deal,” Ablett said.

Ablett still has his old textbook from Dr. McElwee’s class in his office.

“So I miss Jack, but I also know I carry his investment in me. Like the book, I’m a little beat up, I’m marked with notes and flagged with reminders on key topics. But he has become a part of me, and literally thousands of other students and faculty,” Ablett said. “We were privileged to have studied under him and worked alongside him. We’re better because of him, and he inspired us to make others better.”

Kechichian said that in his time as a student and staff member at the University, he has met people who have had an impact on his life that he calls “The Magnificent Five.” Dr. McElwee was one of them, he said.

“As an employee, I have spent numerous times sitting across the table from him at Davenport Dining Hall at lunch time. We would talk about work, life and family,” Kechichian said.

Kechichian recalled his first encounter with Dr. McElwee in a business statistics course and having feelings of both revelation and fear at the same time.

Despite this, Kechichian said that he found himself moving to the front of the class to listen to Dr. McElwee’s stories.

“To my faculty colleagues here today, I say what you teach and lecture in the classroom stays with your students,” he said.

In McElwee’s case, even after 40 years at the podium.

“We know and recognize that there are many people in our past who have given us their hearts, minds and souls to nurture in us the things they think are vital to our education, critical to our success and vital to our future.”

Zandra Wagoner, university chaplain, said that Dr. McElwee and Joy loved the music of Michael Ryan, adjunct professor of music, and they would go to the Candlelight Pavilion in Claremont to hear Ryan play before the actual show.

“It was always very special the way Joy always told it to me that Jack got a kick out of Michael Ryan’s music,” she said.

Wagoner said Dr. McElwee loved to teach and was willing to give up a high paying position to do what made him happy.

“He was known as a great teacher, known for his commitment to supporting students, as well as a champion for faculty and staff,” Wagoner said. “He was also known for giving people a hard time. He was always quick with his wit and his dry humor.”

Wagoner said that the community is better because of Dr. McElwee’s presence on campus for more than 40 years.

Leopards fall to Regals, 77-70
Students vow to improve attendance in 2020