By David Gonzalez on February 21, 2020 in Feature Slider, News 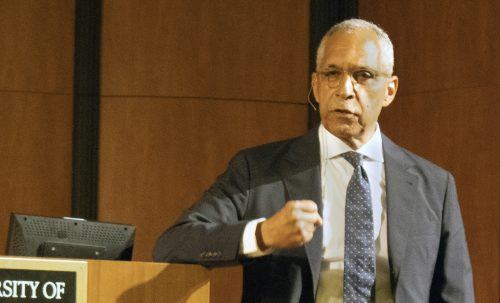 Claude M. Steele, social psychologist and professor of psychology at Stanford, speaks on how building trust can improve performance in higher education with growing diversity at the Frederick Douglass Human Rights Lecture Wednesday in Morgan Auditorium. / photo by David Gonzalez

Steele said the main question he wanted the lecture to focus on was how to foster a successfully diverse community, society and institution. In particular institutions of higher education.

“What I mean by successful is a community in which people feel that I can contribute with my identity and experiences and at the same time not be disadvantaged by that background,” Steele said.

Steele said a fundamental American challenge is maintaining the ethos of diversity in the face of an increasingly diverse society.

Because of this, institutions of higher education need to ask whether it has the correct pedagogy and systems that are well suited to diversity.

“Campuses are the place where we see this most vividly. There is a greater articulation of identities of all sorts,” Steele said.

The growing diversity does not just mean diversity of race, but also of immigration status, sexual orientation and religion, he said.

“We’ve had a certain overarching approach to this that I remember coming into being in the mid ‘60s as the Civil Rights Movement established the openness of society. We’ve had a general strategy that we were going to be color blind.”

Steele said this meant that people were going to be seen as individuals.

The job of a disenfranchised group, however, was to assimilate to the mainstream values and standards.

The idea of a color blind society is rooted in fairness, but it is important to identify its weaknesses and adapt to them.

One of the biggest challenges of color blindness is that it does not address the nature of social identities.

“When you think about what a person has to deal with in order to mature is an important thing in life,” he added.

Contingencies that come with any identity include different stereotypes that lead to people judging based on those stereotypes.

“When you’re color blind, we miss it. You don’t see it. And when we don’t see it, our institutions can’t adapt to it,” Steele said. “And that becomes a fundamental challenge in this project that is so noble in our American history.”

Stereotype threat is one of the many examples of psychological contingencies based around identity.

Stereotype threats lead people to seek to either confirm a stereotype or disprove and break away from it, which ultimately leads to people underperforming, Steele said.

When these issues are brought together in society, the fundamental issue is trust, Steele said.

“It may be more important building trust than it is to focus on eliminating prejudice,” Steele said. “Prejudice is a horrible toxicity in our society and lives, but trust is a more fundamental thing.”

The path forward is for institutions to build trust, but that is not happening because of color blindness, Steele said. Taking actions that explicitly build trust is the first step in dealing with an increasingly diverse population, he said.

“Trust is a game that is played on the ground. It’s who shows up, it’s who listens, it’s who responds, it’s who gives real help,” Steele said.

Brian Clocksin, interim dean of the college of arts and sciences, has followed Steele’s work and has thought of applying the ideas of how stereotype and identity threat affects faculty and students as they transition in their careers.

“The great part about looking at practical things we can do as teachers as colleagues to help eliminate or minimize the impact of identity threat, stereotype threat was a great piece of today’s conversation,” Clocksin said.

Clocksin said that it is important for him and other educators to do subtle things to establish trust between students like Steele mentioned.

Leeshawn Moore, director of institutional research, said that while she may not have learned from the research Steele presented in his lecture, it does support her own research and is the reason why she tracks student success.

“When we are talking about outcomes and what the impacts of what is going on, his research serves as a strong foundation for us to think about trust and about meeting the students,” Moore said.