By Campus Times Editorial Board, Danielle De Luna on February 14, 2020 in Editorials, Opinions 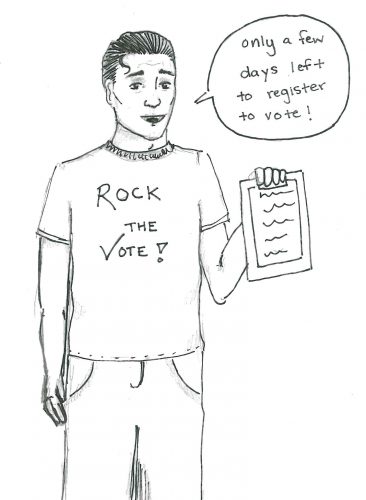 Voting is the fundamental right of every U.S. citizen. It allows the people to come together and elect leaders through the democratic process.

With the 2020 elections coming up, it is important that we all exercise our natural born right to vote.

Californians can register to vote at registertovote.ca.gov in a few easy steps. To start, you must provide a California driver license or identification card number, the last four digits of your Social Security number and your date of birth.

The deadline to register to vote is the 15th of the month that comes before the election.

Because of the holiday weekend, the deadline for the March 3 election has been extended to Tuesday.

If you miss the deadline, you can still register and vote via a provisional ballot.

Provisional ballots are stored separately and investigated by local election officials who check the eligibility of the voter who sent it in.

Your provisional vote will count unless an eligibility issue arises.

Voting, especially in the 2020 election, is of the utmost importance if change is ever expected to happen.

When we vote, we not only vote for the leaders of our country, but on critical issues.

Older Americans tend to vote at much higher rates than younger Americans.

Despite the younger generation having the lowest voter turnout, there was a 1.1% increase from the 2012 election.

While the increase is not significant, it shows that young people want to see change.

With so many human rights at stake, with the planet at risk because of global warming, the 2020 election could be the most consequential election of our lifetime.

The way to protest the status quo is by voting. If we as a younger generation want to see change, we must all register and vote this year and every year.