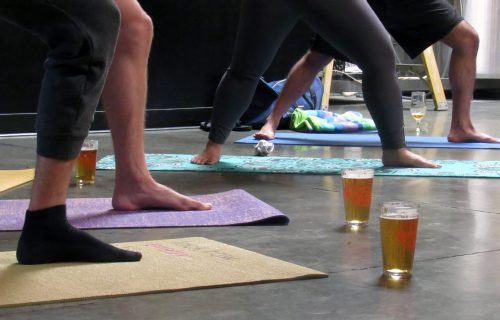 The unlikely combination of yoga and beer have managed to settle together at the La Verne Brewing Company. Every Sunday at 11 a.m., yoga enthusiasts participate in Bend, Breathe and Brew, a series of poses and stretches where the brewery serves beers during the whole lesson. By end of the lesson, participants feel either zen or lightheaded. / photo by Brianna Estrada

“Hand out. Beer out.” This is the mantra you can hear echoing throughout the La Verne Brewing Company every Sunday when they host their weekly yoga and beer event: “Bend, Breathe, Brew.”

Hidden among the industrial buildings next to the Fairplex lies the small beer oasis.

Upon entering, customers are immediately welcomed by a friendly staff and general manager and Sunday bartender, Tate Jensen.

Jensen said the odd combination of practicing yoga while drinking beer started with effort from both the staff at the La Verne Brewing Company and yoga instructor Julie Olson.

“We got approached by Julie asking if we want to do kind of a beer yoga combination on Sunday mornings,” Jensen said. “And it really got some legs. It really got a lot of regulars involved. We got a lot of people coming in that wouldn’t have come into the brewery otherwise, which is great.”

The main brewery area serves as the make-shift yoga studio for the morning.

As yogis prepare for their hour session with Olson, Jensen mans the bar and delivers pint after pint to each of the yoga participants.

Many of the participants chatter while setting up their mats and getting their drinks ready – some just water, but most beer.

Then, Olson calls the class to attention and the real fun begins.

Throughout the hour session, Olson leads the class in a series of traditional yoga poses and stretches with a unique twist.

The participants work hard but still have fun while cracking jokes and sipping their beers between short breaks, creating a positive environment that Olson says is the reason many of them keep on coming back.

“They like the atmosphere in here and I think they like the challenge of trying to do different poses as they try to drink their beer. We did just have our first spill today but that was awesome,” said Olson.

After the hour session ends, most of the participants hang around to catch up with one another, grab another drink and enjoy some snacks.

One of the participants is a brewery regular and substitute yoga instructor for Olson, Cheli Han.

“I love coming to yoga on Sundays. I call it yoga church on Sundays because I can sing in my car on the way over,” Han said. “It’s just such a great environment.”

Han isn’t the only yoga and beer fan among the group. Another brewery regular is Derrick Torres, who said that no matter what your age everyone should come try this.

“OK, if you’re under 21 just do it for experience, just to be around a positive community. If you’re over 21 there’s beer here. Bottom line,” said Torres.

To anyone having any doubts whether this event is for them, Olson has a message for you.

The hour-long yoga session is free with beer starting at just $5.

Brianna Estrada can be reached at brianna.estrada@laverne.edu.

O’Neal jazzes up the classics
Leopards outpaced by Banana Slugs