By Campus Times Editorial Board, Danielle De Luna on March 13, 2020 in Editorials, Opinions 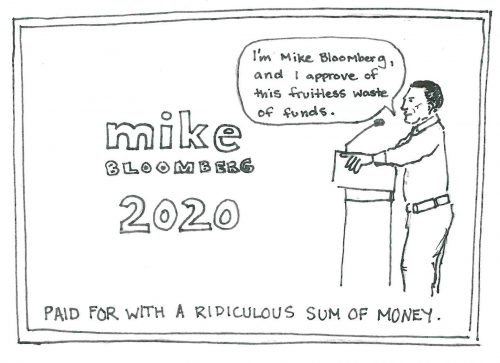 Mike Bloomberg and Tom Steyer spent over $700 million combined on advertising for their presidential campaign, which barely made a dent in their pocket through the process, but could have been better spent funding solutions to many of the United States problems.

To replace the piping in Flint, it would cost around $55 million, only one-tenth of what Bloomberg’s campaign cost. That money could have been used to help aid an entire city in their struggle for clean water, as many residents have not had reliable drinking water since 2014.

This large sum could have provided aid to thousands of people across the nation with a student debt that reaches $1.5 trillion. The average student has $37,000 in student debt, that financial burden could have been taken from 13,500 contributing members of society.

The campaign employees gave up their time and skills for a lost cause when they could have contributed their efforts to organizations that actually do things to help American society.

If helping strangers does not seem appealing to either of them, they should instead consider the idea of helping their own families’ future generations to come. There are several efforts across the globe working toward solving the issue of climate change, such as Team Trees.

Team Trees is an initiative started by a group of various YouTubers who plant trees across six continents with the help of the Arbor Day Foundation. For every dollar donated to their website, teamtrees.org, a tree is planted. Wealthy celebrities such as Elon Musk have donated as much as $1 million, but with a donation that reaches over $700 million, the Earth would have an added 700 million trees to aid with its growing Co2 emissions.

Billionaires buying out their votes in such a prominent way raises a number of ethical concerns such as the ability to buy out the government. Instead of trying to buy their way in, they should actually contribute to making change to properly earn their way in.