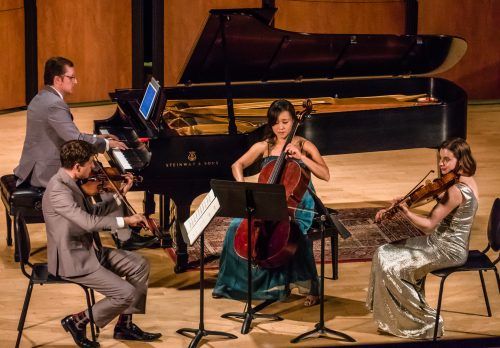 Morgan Auditorium burst with harmonious classical music as five musicians gathered to perform as a chamber music ensemble for strings and piano on Sunday.

“Every performance is different. During this performance we were taking more risks and we were more spontaneous,” said pianist Rafael Liebich who is also an artist-in-residence at the University of La Verne. “We would take more time to listen to each other so that way if we were slightly off then we could quickly adjust.”

As the lights in the Morgan Auditorium dimmed, the audience grew silent and the musicians began to prepare to play the first note.

There were three pieces that were played, however the second piece “Piano Quartet in A minor,” and the third piece “Piano Quintet in E-flat Major” were structured into three and four different parts.

The song titled “Piano Quintet in E-flat Major” by Robert Schumann captured the attention of the audience through its four different parts and the quintet’s own unique sound.

In the final performance of the evening, the performers took the stage and started off with a resounding opening cue that held for a split second and then simmered down into quieter notes that were higher in pitch.

The sounds would alternate quickly from high-pitched to low-pitched in a way that is often heard as introductions in classical pieces.

There was excellent communication between violinist Russell and pianist Liebach.

Russell led the piece and the rest of the string players followed suit.

There was a faster tempo to this piece and throughout its various parts the performers seemed engaged as the movement of their bodies kept in sync with the music.

The second part was the only one to keep a consistent slow tempo throughout, while the third and fourth parts were fast, with a more lively ending.

“My favorite piece was the last piece which was the Schumman piece,” said Russell. “There was a lot more energy with that one and that was a more demanding piece, but when we come together there is an energy that fills the room.”

Another piece was titled “Trio Élégiaque No. 1 in G Minor” and was performed by Russell, cellist Joo Lee and Liebich.

“Trio Élégiaque No. 1 in G Minor” was composed in 1892, shortly after the Romantic period, which contained classical arrangements of music with a twist of whimsical and soft tones, mostly on piano.

This piece felt light and relaxed until the build up which caused anticipation and grew even louder as time passed. It created further suspense for what was to come.

A similar piece to the first was “Piano Quartet in A Minor.” The first of three parts was called “Lento,” and consisted of rippling waves of the violin, cello and piano.

“Lento” starts off with a strong violin introduction.

It was a very active, fast-paced song that made it appear as though a lot was happening on stage. It seemed like each musician was performing their own solo with the different directions each instrument was taking.

The room vibrated, and the crescendos made the music expand in range. It started with a big pang of expectancy.

The song was filled with low tones that made it sound eerie, setting up a darker atmosphere throughout the room.

The second part, titled “Vivo,” was faster than the last.

It contained a lighter and happier atmosphere, and the energy on stage was reflected on the faces of the audience members who had grown more engaged.

“The performance was so superb and extraordinary. You can definitely tell there is a high expertise level from each of the performers,” said Angela Breard, Dudas’ mother.

The final part, titled “Andante – Allegro Molto,” started off with a violin solo.

The piano then creeped in with a tonality of malevolence as its deep, uneven keys played here and there inconsistently throughout.

“The energy we had during the Schumann piece was great,” said violinist Dudas. “That piece was a bit more difficult though because of its texture, and it was slightly hard to find your place.”

For more information on either performance, contact the University of La Verne music department at 909-448-4917.

Lilliana Perez can be reached at lilliana.perez@laverne.edu.