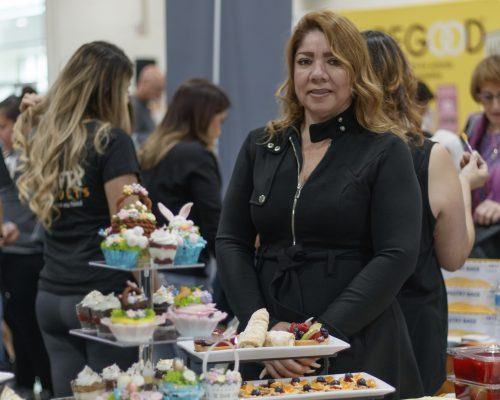 Baking instructor Silvia Castanon displays her creations at the 50 Fifty Products booth at the LA Cookie Convention. Castanon and other exhibitors sold products, shared knowledge and hosted tastings Saturday and Sunday at the Fairplex. / photo by Danielle De Luna

The aroma of sugary goods floated throughout the air all weekend long at the L.A. Cookie Convention and Sweets Show at the Fairplex in Pomona.

There were more than just cookies at the event. Booths featured various sweets, savory foods and even baking supplies.

From melty chocolate chip cookies to fluffy yet crispy marshmallows on s’mores, spectators found everything they need to satisfy their cravings.

Crowds filled the walkways checking out the offerings.

Hershey’s booth had grills located in front of its mobile, which offered jumbo s’mores.

Darlene Whittington, a Hershey employee said that while the event catered to cookie and baking enthusiasts, there was something for everyone.

“This booth is for everyone. I’ve seen babies to grandparents come by our booth,” said Cookie Jar employee Allison Metoyer. “The event is catered to anyone who loves sugar.”

Kate Young of Pomona, brought her family and young children, because, Young said, they were looking for a family event.

Stages were set up throughout, and celebrity cooks and chefs jumped on stage to give live cooking demos.

Among them was Ron Ben-Israel, a New York based pastry chef and judge on the Food Network’s “Cake Wars.” He hit the main stage Saturday.

Los Angeles based chef Duff Goldman, from the Food Network show “Ace of Cakes” drew an even bigger crowd on Sunday.

“His fans were already lined up for the VIP line before the event even had started. We had to get extra security to clear walkways. It was insane, but it was great for the event,” Cruz said.

“It might have been one of our best shows we’ve thrown because of the turnout,” said Mary Cruz, stage manager and co-coordinator for the event. “We like to say the show is more of a family and consumer type event. We really incorporated that more this year (and) we believe it worked great.”

Josue Arellano can be reached at josue.arellano@laverne.edu.