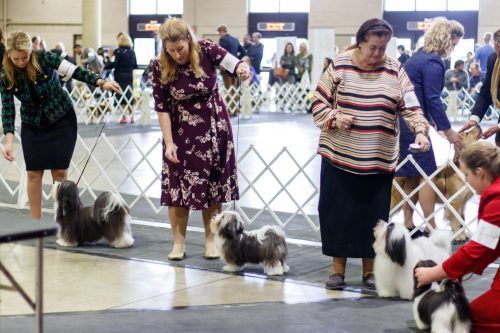 Owners in the toy group prepare their dogs for judging with treats and praise. The toy group is known to produce Best in Show winners. Breeders and owners competed at the Purina Beverly Hills Dog Show at the Fairplex Expo Halls on Sunday. The show will air on NBC on April 5. / photo by Danielle De Luna

The Fairplex was packed with over 200 breeds of highly trained and perfectly groomed dogs Saturday and Sunday at the Beverly Hills Dog Show.

This annual event showcases some of the most interesting categories such as Best in Show, Best Walk and other various categories based on breed.

The Kennel Club of Beverly Hills, founded in 1965, hosts this dog competition to show dogs from all over the world.

The weekend included a series of competitions to crown the best dog in terms of appearance, behavior and skills.

“They’re absolute sweethearts, and they have the best attitudes and are easy to care for,” Kane said. “They love attention and are very friendly despite the stigma they have as hunting dogs.”

These dogs were originally bred and raised in South Africa to hunt, but were trained as show dogs. Sansa and Blue took home two awards, Winner’s Bitch and Grand Champion Select, which are the only two categories that go toward championship points.

The sound of barking and the hum of blow dryers for last minute grooming could be heard throughout the venue, creating a hectic atmosphere.

Owners had portable grooming tables set up along the walls of the arena.

Bill Bobrow, owner of an Akita – a breed that originated in Japan and resembles a large fox – brushed his dog’s hair for the last few times before entering the ring where she would be judged on her walk and appearance in comparison to other dogs of her type.

“I have had her for a very long time and she’s always so friendly and excited to be around people,” Bobrow said.

Due to the number of breeds at the event, there were several competitions going on at one time. There were six different rings set up as pugs, American hairless terriers, bullmastiffs and Jack Russell terriers competed for Best Walk at the same time.

On the final day, each breed was judged for a final run through to choose Best in Show.

Bullmastiffs, the crowd favorite, are muscular dogs that have an intimidating look, but were very charming in and out of the ring.

Gus, a 2-year-old bullmastiff, stole the hearts of many with his timid personality and gentle nature toward the children in the venue. Many children were able to pet him, and he gave kisses.

“We named him Gus after the mouse from Cinderella because despite his rough exterior, he is a little mouse,” said James William, Gus’ owner and first time dog show competitor.

A polar opposite to the bullmastiff were the American hairless terriers, with their small and hairless bodies.

Ashley Schaefer, a long time competitor and owner of an American hairless terrier, educated a group of people on the interesting nature of this breed.

“They are born with a fur coat and start to shed all of their hair off as they start growing until they’re completely hairless,” Schaefer said. “They literally only grow whiskers.”

The Beverly Hills Dog Show, sponsored by Purina, will be televised on NBC at 9:30 a.m. April 5.