By Campus Times Editorial Board, Danielle De Luna on March 6, 2020 in Editorials, Opinions 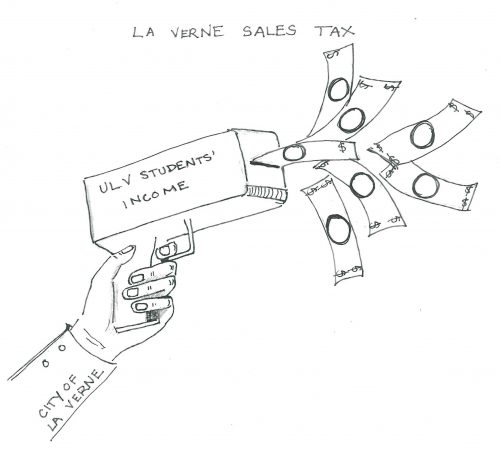 With Super Tuesday in the books, shoppers and diners in town – like us, the students at the University of La Verne – need to get ready to pay more out of pocket for just about everything.

That’s thanks to voter approval last week of Measure LV, which adds a 0.75 % to taxable items in the city effective July 1.

In total the ballot measure raises sales tax to 10.25%, which for students, the primary patrons of downtown La Verne, adds up.

The tax, which was supported and promoted by the entire City Council, will raise funds to “protect and improve the quality of essential city services and infrastructure,” according to a statement put out by the city.

According to the statement, the city “only receives a 1% share of the current 9.5% sales tax” and “all sales tax revenue generated in our city goes directly to the State, L.A. County, or other taxing entities such as Metro.”

The tax, which is expected to raise $3.1 million is by definition a regressive tax.

It is not income sensitive or property dependent.

It hits lower income consumers, like us students, harder by costing a higher percentage of our total income.

With the shops and diners on D street already not being conscious of their high prices, this only discourages students from putting money back into the city of La Verne.

This sales tax begins to add up and discourages people to come to the city that is already so small and gets lost on the Southern California map.

A few more cents a day from the pockets of roughly 2,500 students alone will add an expected $3.1 million annually budget for salaries toward city workers, including police and fire fighters, who largely serve and protect city residents.

This tax has a direct correlation to giving back to the city, that being said, it should not effect those that are visiting the city, instead it should be aimed at the residents in La Verne.

It makes more sense to tax the citizens who reside in the community and benefit directly from city employees and the services they perform.