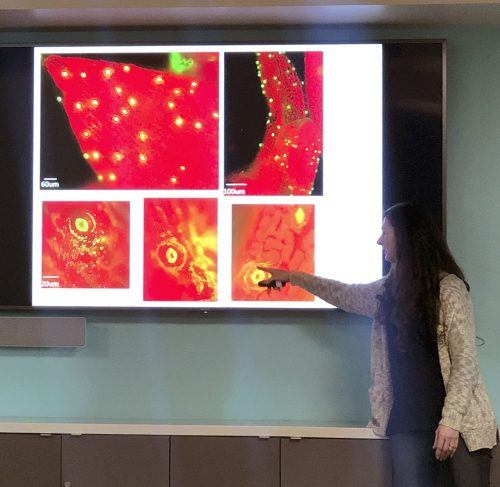 Stacey Darling-Novak, professor of biology, discusses her research on improving plant life with microbes on Tuesday in the Quay Davis Executive Board Room. / photo by Sheridan Lee

Stacey Darling-Novak, professor of biology, discussed her research of the early development of orchids and use of microbes to improve plant life Tuesday in the Quay Davis Executive Board Room.

Darling-Novak opened her lecture titled “Confocal Imaging of Bacterial Colonization During Germination” with an introduction of artificial breeding programs and transgenic plants. Transgenic plants have the ability to modify and improve the quality of a product.

“We reached the point where we come up with new ideas and certainly transgenic plants can do that for us, but we can also introduce microbes that can do some of these jobs for the plants,” said Darling-Novak. “We’re interested in those microbes that do good things for our plants.” Darling-Novak chose orchids because of their vulnerability, frailness, and the fact that they are very needy due to the care they need.

Microbes play a major part in her research because they assist with plant production, such as hormone production, growth enhancement and nutrient and water intake. Darling-Novak wanted to focus on having the microbes show up in the next generation.

She was able to successfully isolate the microbes and said that she wants plants to be able to fix their own nitrogen from air, as microbes help assist with nitrogen intake. During germination decisions were made by the microbes, as they were not evenly distributed in the plant.

Darling-Novak questioned how bacterial endophytes enter the plant, and found access points including the stem and the soil near the roots. Darling-Novak showed images and videos demonstrating the use of confocal microscopy showing the leaf stomata.

The microbes reached the destination and completed the population but did not pass on to the second generation. Several of the orchid bacterial endophytes identified were characterized as stress responsive.

Acinetobacter johnsonii, a bacteria collected in the leaf, and pseu domonas putida, another bacteria, were equally represented by high operational taxonomic unit values in both plant organs. These species form biofilms and are able to work together in the orchid’s seedling leaves.

Darling-Novak said she wants to focus on transforming microbes with GFP plasmid and track the movement during development, as well as looking at microbes as they isolate from protocorm tissue as it often refuses to separate and grow. Another organism she discussed was corn, and how it has been similarly researched.

“You can translate the research to other agricultural products, take these applications in a broader range of things to help the plant with microbes, and get necessities that are needed or lacking. Especially in countries that don’t have the appropriate conditions to grow the plant and if they don’t have enough water, they live in a drought area, we can help out the plant,” said Sabrina Delgadillo, assistant biology lab manager.

The confocal microscope is an optical imaging technique. It is used to provide the highest resolution quality of content, and is not just limited to plants.

“What stood out the most was the confocal imaging,” said Kylie Upthegrove, biology department manager. “I think partly just because it’s nice to see that our University is advancing, especially with our technology, and particularly in the science department just because STEM is so important, and getting such an advanced piece of equipment is going to help research across the board for all undergraduates, which is rare.”

Sheridan Lee can be reached at sheridan.grenda@laverne.edu